Approximately 38 percent of dads said they'd like to take in a ball game with the family, while one in three dads are just looking to watch whatever they want on television.

LOS ANGELES - If you're struggling to come up with a gift for your dad on Father's Day, you might want to just pick up the phone rather than buying him a new tie.

A new survey of 2,000 dads found that 76 percent prefer an experience over a physical gift, and the most wanted gift was just a simple phone call from his kids.

While catching up with his son or daughter topped the list, 41 percent would take a big, juicy steak for dinner and 38 percent just want some peace and quiet this Father's Day.

The survey, conducted by OnePoll on behalf of Omaha Steaks, also found that 57 percent of dads said it’s their favorite day of the year. 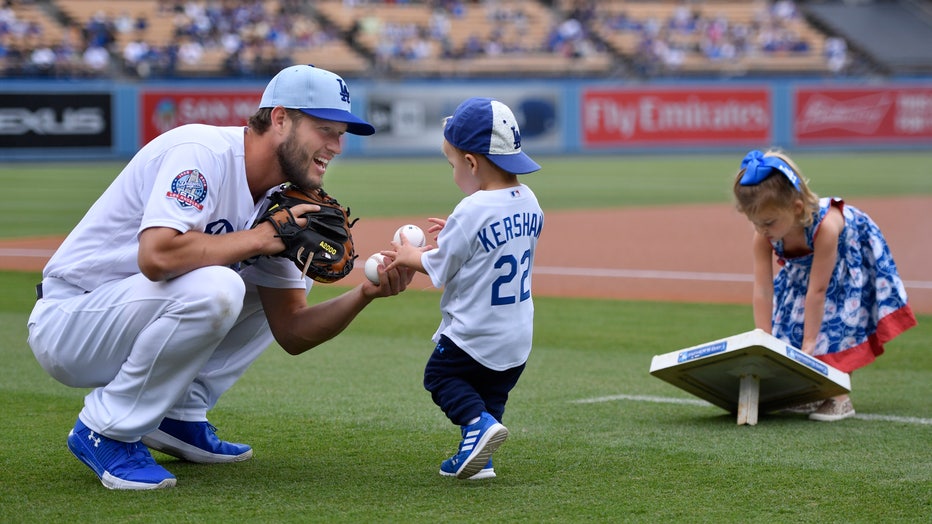 Clayton Kershaw #22 of the Los Angeles Dodgers plays with his children Charlie and Cali on Fathers Day before playing the San Francisco Giants at Dodger Stadium on June 17, 2018 in Los Angeles, California. (Photo by John McCoy/Getty Images)

Another idea for dad this year could be going to his favorite sporting event. Approximately 38 percent of dads said they'd like to take in a ball game with the family, and 35 percent would enjoy an “ice cold beer or two.”

Give up the remote, everyone: One in three dads are just looking to watch whatever they want on television.

And before you go shopping for that “World's Best Dad” mug, 64 percent of dads reported that they specifically don’t want anything that says “World’s Best Dad” on it this year.

Most dads who responded, 76 percent, said they like to bond with their children over food. If you're thinking about grilling for dinner, step aside, because one in three dads said that if anyone is grilling — it’s them.

The survey also found the top 10 signs that your father has reached “peak dad.” What does that mean, exactly?

Dads reported laughing at their own jokes (33 percent), busting out cheesy moves on the dance floor (32 percent), embarrassing their kids on purpose (31 percent), getting excited to go to home improvement stores (29 percent), having a “chair” (28 percent) and spending time in “the shed” (28 percent) as all definitive signs.

It takes an average of four years after their first child is born before hitting “peak dad,” the survey concluded.