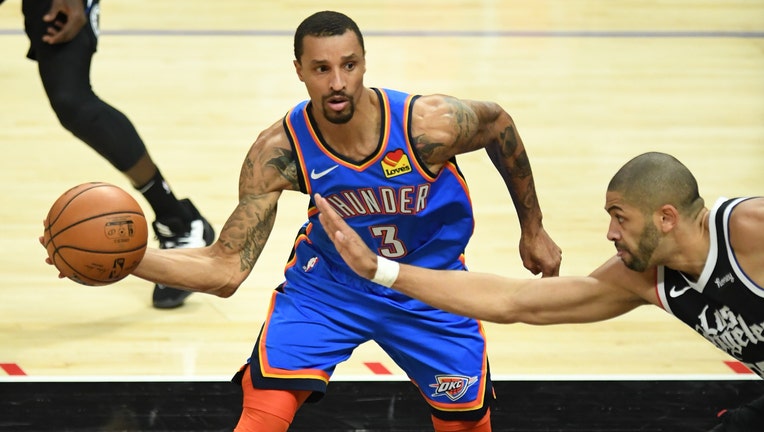 George Hill #3 of the Oklahoma City Thunder passes against he LA Clippers in the first half of a NBA basketball game at the Staples Center in Los Angeles on Friday, January 22, 2021. (Photo by Keith Birmingham/MediaNews Group/Pasadena Star-News via G

PHILADELPHIA - The Philadelphia 76ers have added another veteran ball-handler to their lineup in a three-team deal ahead of the NBA's trade deadline.

The Athletic's Shams Charania reported Thursday the Sixers have agreed to a deal to acquire point guard George Hill from the Oklahoma City Thunder.

In return, ESPN's Adrian Wojnarowski reports Thunder will receive two future second-round draft picks and center Tony Bradley, who has been starting in place of the injured Joel Embiid. 76ers guard Terrance Ferguson will also go to the New York Knicks as part of the deal.

The Knicks are reportedly also sending guard Austin Rivers to the Thunder, and small forward Iggy Brazdeikis to the 76ers, Wojnarowski reports.

Hill, 34, brings a ton of experience to the Sixers locker room and adds another ball handler to a bench unit that has been on a hot streak of late.

In just 14 games with the Thunder this season, Hill has averaged just under 12 points and more than three assists per game.

Bradley, 23, was acquired by the Sixers this past offseason in a trade and has appeared in 20 games. He has started in eight games for the Sixers when Embiid has been sidelined with injury or by the NBA's health and safety protocols.

He's averaged more than 5 points and 5 rebounds in a little more than 11 minutes per game so far this season.