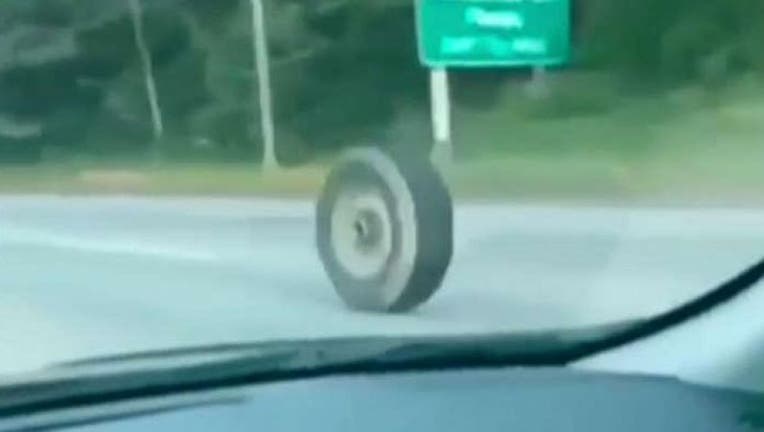 EDISON, N.J. - (FOX NEWS) -- A New Jersey police officer's Jeep was heavily damaged Wednesday when a loose tire rolling down the freeway jumped the median and slammed into the vehicle as he was traveling in the opposite direction.

John Rice, an officer in Piscataway, was traveling behind a vehicle with his wife and three young children as the large tire aimlessly rolled down State Route 440 in Edison in the opposite lanes, he told WABC-TV.

A video of the runaway tire that has since gone viral shows it rolling down a freeway and jumping onto the center divider.

It travels atop the median for a few seconds before clipping the vehicle being driven by Rice's wife, Allison, and then slamming into the Jeep.

"Out of nowhere a tire jumps across the median from the opposite direction into our side of the roadway," Rice told the news outlet. "Didn't notice at the time but it struck the rear of my wife's car and came directly toward the front of my Jeep."

The video shows the tire colliding with the Jeep, followed by debris being scattered across the freeway.

"I instantly thought he was dead," Allison Rice said.

No one was seriously injured, though.

New Jersey State Police detectives are investigating where the tire came from.