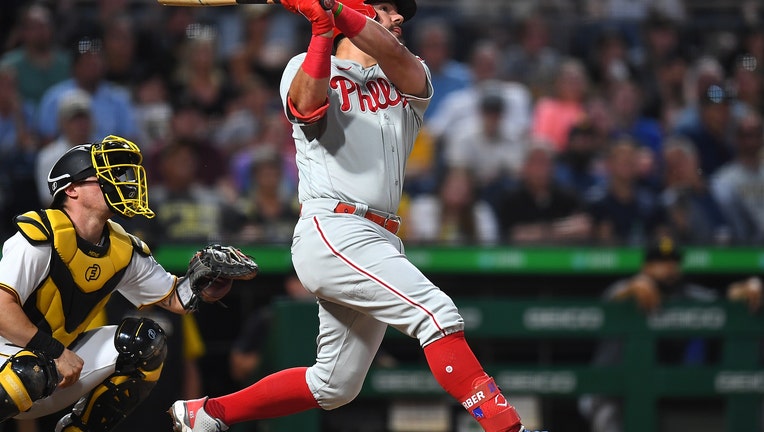 PITTSBURGH, PA - JULY 28: Kyle Schwarber #12 of the Philadelphia Phillies hits a three run home run during the sixth inning against the Pittsburgh Pirates at PNC Park on July 28, 2022 in Pittsburgh, Pennsylvania. (Photo by Joe Sargent/Getty Images)

PITTSBURGH - Kyle Schwarber hit his National League-leading 32nd homer and Zack Wheeler pitched seven strong innings as the Philadelphia Phillies built a large lead and then held on for an 8-7 win over the Pittsburgh Pirates on Thursday night.

Schwarber’s three-run shot to right-center field off Zach Thompson in the sixth inning gave the Phillies a 7-0 lead. In the seventh, rookie Cal Mitchell ended Wheeler’s shutout bid with a two-run homer.

The Pirates scored five times in the ninth inning. Tyler Heineman doubled in two runs and Kevin Newman followed with a two-run triple off Jeurys Familia.

Seranthony Dominguez replaced Familia and gave up Oneil Cruz’s RBI groundout that got the Pirates within a run. Dominguez then retired Ke’Bryan Hayes to end the game and earn his sixth save in seven chances.

Nick Castellanos had three of the Phillies’ 15 hits. Schwarber, Rhys Hoskins, Alec Bohm and Matt Vierling added two each for Philadelphia, which won for the third time in four games.

The run-scoring outburst came a night after the Phillies wrapped up a homestand with a 7-2 victory over the Atlanta Braves. Prior to Wednesday, Philadelphia had scored three runs or less in 11 of 14 games.

Wheeler (9-5) allowed two runs on three hits while striking out eight and walking three. He has pitched into the seventh inning in five of his last six starts and is 3-0 in his last four outings.

The Phillies jumped on Thompson for three runs in the first inning. Rookie Darick Madris scored on a single by Castellanos.

Thompson (3-8) was tagged for seven runs and 11 hits in 5 2/3 innings. He also gave up seven runs in his previous start against Miami after allowing two earned runs or less in 10 of 11 starts.

Bohm’s RBI single in the second made it 4-0. The third baseman is hitting .443 in July and was moved up to the No. 3 spot in the batting order Thursday for the first time since his rookie season in 2020.

Mitchell had three hits and Kevin Newman added two as Pittsburgh lost for the ninth time in 11 games.

Pirates center fielder Bryan Reynolds was placed on the paternity list before the game, and Madris was recalled from Triple-A Indianapolis. Reynolds can be on paid leave up to three days under MLB rules.

Pirates: RHP Chase DeJong (left knee tendinitis) could be activated from the 15-day injured list Aug. 1, the first day he is eligible.

Phillies: LHP Bailey Falter (0-3, 5.18 ERA) will start Friday night in search of his first win in his 11th game of the season and seventh start.

Pirates: LHP Jose Quintana (3-5, 3.70) could be making his last start for Pittsburgh. He has been involved in much speculation ahead of the MLB trade deadline Aug. 2.