A group of scientists and engineers who love coffee realized there were a couple of distinct things that could be made better about it — namely, reducing the bitterness of the brew and reducing the impact of production so that coffee can be enjoyed for generations to come.

SEATTLE - As the future of coffee beans as a crop faces uncertainty, a group of food scientists, biochemists and entrepreneurs at Atomo Coffee have reverse-engineered the coffee bean to create a smooth version of their favorite morning drink that has the same caffeinated kick but doesn’t require any beans at all.

Atomo Coffee was started by Jarret Stopforth, Ph.D., a radical food scientist with 20 years of experience, and Andy Kleitsch, an entrepreneur who has been working in wireless, internet and payments for more than 20 years.

They love coffee, but realized there were a couple of distinct things that could be made better about it — namely, reducing the bitterness of the brew and reducing the impact of production so that coffee can be enjoyed for generations to come.

Stopforth noticed that he was altering the taste of his coffee every day by adding sugar and milk. He realized he was trying to get rid of the bitterness of the brew with these additions, so he set out to see if he could deconstruct coffee beans at a molecular level to reproduce his favorite flavor profiles without the bitterness.

“I love coffee, but every day I was adding cream and sugar to mask coffee’s bitter flavor” said Stopforth. “By replicating the taste, aroma and mouthfeel of coffee, we’ve designed a better tasting coffee that’s also better for the environment.”

Sixty percent of all coffee species are threatened with extinction, according to research published in Science Magazine this January, and some of them may start disappearing in the next 10 to 20 years. This is due to a variety of factors, including climate change (most specifically exacerbated droughts), the spread of devastating fungal pathogens, and coffee wilt disease.

“We believe we have a moral obligation to stop harmful coffee farming practices, but none of us want to stop drinking coffee.” said Andy Kleitsch, CEO of Atomo. “Atomo’s technology can halt the need for further deforestation by reducing the demand for coffee beans.”

The research and development team for Atomo, led by Stopforth, who has previously worked for brands like Chobani and Soylent, broke roasted coffee beans down to a molecular level. They studied the more than 1,000 compounds that determine the body, mouthfeel, aroma and color of a cup of coffee, honing in on those compounds responsible for the taste and aroma of coffee. Then they sourced naturally-derived compounds that could be combined to create a new form of the drink, called “molecular coffee.” 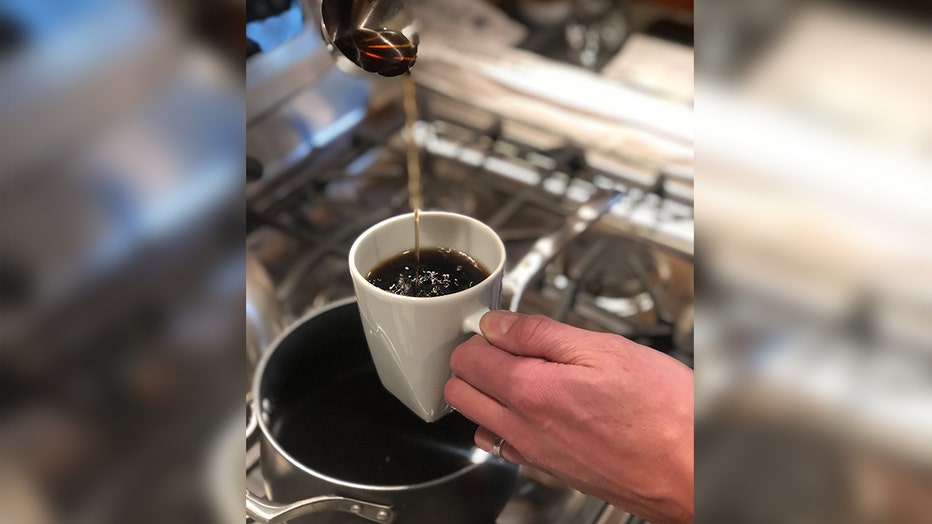 A cup of Atomo coffee is poured out during the development stages of production. (Atomo)

The team at Atomo wants the experience to be as close to traditional coffee-drinking as possible.

“We are building mouthfeel and body of molecular coffee to mimic that of conventional coffee by replacing the polysaccharides, oils and proteins found in the insoluble part of the coffee ground with natural, sustainable and upcycled plant-based materials that deliver the same great effect,” said Stopforth.

Even the decision to distribute Atomo Coffee as grounds came down to wanting to preserve the authenticity of the classic coffee experience. The Atomo team says that deciding to produce grounds that can replace coffee bean grounds boiled down to preserving the ritual of making coffee — a deeply-ingrained part of many people’s morning routine.

What about the authenticity of the taste, though?

In a very small sample blind taste test at University of Washington, where Kleitsch is on the board of the M.S. Entrepreneurship program, 21 out of 30 students, faculty and administrators said they preferred the taste of Atomo Coffee to Starbucks.Atomo Coffee has thus far been entirely funded out of pocket, but a Kickstarter campaign created by Stopforth has already gained $25,331 in donations from 693 backers, proving that there is tangible interest in molecular coffee.

The development team is currently finalizing Atomo’s flagship flavor profile, and Atomo coffee is scheduled for commercial release at the end of 2019.