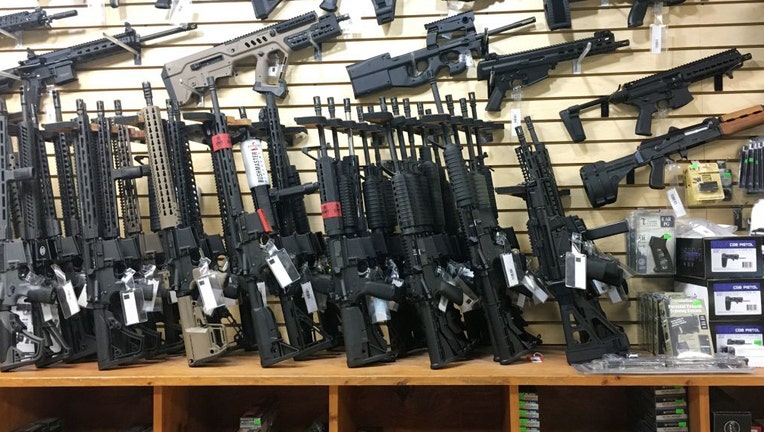 FILE-Semi-automatic rifles are seen for sale in a gun shop in Las Vegas, Nevada on October 4, 2017. (ROBYN BECK/AFP via Getty Images)

WASHINGTON - When President Joe Biden speaks about the "scourge" of gun violence, his go-to answer is to zero in on semi-automatic weapons.

America has heard it hundreds of times, including this week after shootings in Colorado and Virginia: The president wants to sign into law a ban on high-powered guns that have the capacity to kill many people very quickly.

"The idea we still allow semi-automatic weapons to be purchased is sick. Just sick," Biden said on Thanksgiving Day.

After the mass killing last Saturday at a gay nightclub in Colorado Springs, he said in a statement: "When will we decide we’ve had enough? ... We need to enact an assault weapons ban to get weapons of war off America’s streets."

Such a move is still far off in a closely divided Congress. But Biden and the Democrats have become increasingly emboldened in pushing for stronger gun controls — and doing so with no clear electoral consequences.

The Democratic-led House passed legislation in July to revive a 1990s-era ban on certain semi-automatic guns, with Biden’s vocal support. And the president pushed the weapons ban nearly everywhere that he campaigned this year.

Still, in the midterm elections, Democrats kept control of the Senate and Republicans were only able to claim the slimmest House majority in two decades.

The tough talk on guns follows passage in June of a landmark bipartisan bill on guns, and it reflects steady progress that gun control advocates have been making in recent years.

"I think the American public has been waiting for this message," said Sen. Chris Murphy, D-Conn., who has been the Senate’s leading advocate for stronger gun control since the massacre of 20 children at a school in Newtown, Connecticut in 2012. "There has been a thirst from voters, especially swing voters, young voters, parents, to hear candidates talk about gun violence, and I think Democrats are finally sort of catching up with where the public has been."

Just over half of voters want to see nationwide gun policy made more strict, according to AP VoteCast, an extensive survey of more than 94,000 voters nationwide conducted for The Associated Press by NORC at the University of Chicago. About 3 in 10 want gun policy kept as is. Only 14% prefer looser gun laws.

There are clear partisan divides. About 9 in 10 Democrats want stricter gun laws, compared with about 3 in 10 Republicans. About half of Republicans want gun laws left as they are and only one-quarter want to see gun laws be made less strict.

When politicians talk about semi-automatic weapons, they usually mean semi-automatic rifles that can fire 30 rounds fast without reloading. By comparison, most New York Police Department officers carry a semi-automatic handgun that shoots 15 rounds.

Once banned in the United States, the high-powered firearms are now the weapon of choice among young men responsible for many of the most devastating mass shootings. Congress allowed the restrictions first put in place in 1994 on the manufacture and sales of the weapons to expire a decade later, unable to muster the political support to counter the powerful gun lobby and reinstate the weapons ban.

When he was governor of Florida, current Republican Sen. Rick Scott signed gun control laws in the wake of mass shootings at Marjory Stoneman Douglas High School and a night club in Orlando. But he has consistently opposed bans on semi-automatic weapons, arguing like many of his Republican colleagues that most gun owners use their weapons lawfully.

"People are doing the right thing, why would we take away their weapons?" Scott asked as the Senate was negotiating gun legislation last summer. "It doesn’t make any sense."

"Let’s focus on things that actually would change something," Scott said.

Mike Moore, chief of the Los Angeles Police Department, the country's third-largest, said it just makes sense to talk about guns when gun violence is rising nationwide, and consider what the government can do to make the streets safer. He is grateful Biden is bringing it up so much.

"This isn't a one-and-done," Moore said of the shooting in Colorado Springs. "These things are evolving all the time, in other cities, at any moment another incident happens. It's crying out for the federal government, for our legislators, to go out and make this change," he said.

Over the past six months there has been a supermarket shooting in Buffalo, New York; a massacre of school children in Uvalde, Texas; and the July Fourth shooting of revelers in Highland Park, Illinois.

On Tuesday, six people were shot dead at a Walmart in Virginia.

The legislation that Biden signed in June will, among other things, help states put in place "red flag" laws that make it easier for authorities to take weapons from people judged to be dangerous.

But a ban on semi-automatic weapons was never on the table.

A 60-vote threshold in the Senate means some Republicans must be on board. Most are are steadfastly opposed, arguing it would be too complicated, especially as sales and varieties of the firearms have proliferated. There are many more types of those weapons – and many more of the weapons themselves – today than in 1994, when the ban was signed into law by President Bill Clinton.

"I’d rather not try to define a whole group of guns as being no longer available to the American public," said Republican Sen. Mike Rounds of South Dakota, who is a hunter and owns several guns, some of them passed down through his family. "For those of us who have grown up with guns as part of our culture, and we use them as tools — there’s millions of us, there’s hundreds of millions of us — that use them lawfully."

In many states where the bans have been enacted, the restrictions are being challenged in court, gaining strength from a Supreme Court ruling in June expanding gun rights.

"We feel pretty confident, even despite the arguments made by the other side, that history and tradition as well as the text of the Second Amendment are on our side," said David Warrington, chairman and general counsel for the National Association for Gun Rights.

Biden was instrumental in helping secure the 1990s ban as a senator. The White House said that while it was in place, mass shootings declined, and when it expired in 2004, shootings tripled.

The reality is complicated.

The data on the effectiveness is mixed and there is a sense that other measures that are not as politically fraught might actually be more effective, said Robert Spitzer, a political science professor at the State University of New York-Cortland and author of "The Politics of Gun Control."

Politically, the ban sparked a backlash, even though the final law was a compromise version of the initial bill, he said. "The gun community was furious," Spitzer said.

The ban has been blamed in some circles for the Democrats losing control of Congress in 1994, though subsequent research has shown that the loss was likely more about strong, well-funded conservative candidates and district boundaries, Spitzer said.

Still, after Democrat Al Gore, who supported stricter gun laws, lost to 2000 White House race to Republican George W. Bush, Democrats largely backed off the issue until the Sandy Hook shooting in 2012. Even after that, it was not a campaign topic until the 2018 midterms.

"The fact that the American people elected a president who has long been a vocal and steadfast supporter of bold gun safety laws — and recently reelected a gun sense majority to the Senate — says everything you need to know about how dramatically the politics on this issue have shifted," said John Feinblatt, president of Everytown for Gun Safety.