NEW YORK - Throngs of demonstrators joined by elected officials walked solemnly across the Brooklyn Bridge in a solidarity march Sunday against anti-Semitism and all acts of hate.

The “No Hate, No Fear” march was organized by New York’s Jewish community in the wake of recent anti-Semitic attacks, including a knife attack at a Hanukkah celebration north of New York City that left five people wounded and a fatal shootout at a kosher grocery in Jersey City, New Jersey.

The crowds of participants, thousands strong, jammed the streets in lower Manhattan as they waited their turns to get across the bridge.

“It is wonderful that we are doing this and sad that we still have to do it,” said Claudia Stoller, 31, of Manhattan. “But it was never lost on me that the Jewish community could always be targeted and should always be ready to be strong.” 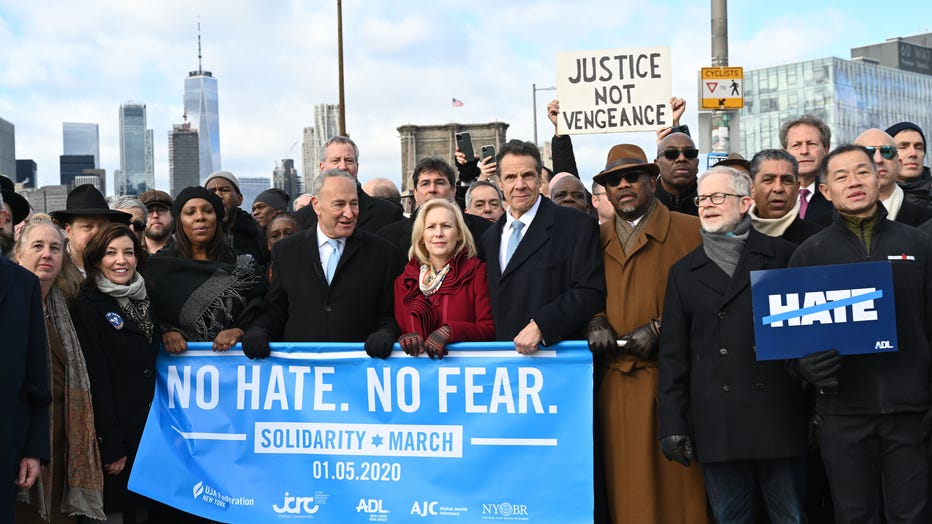 Tiana Gianci, 44, came up from her home in Ellicott City, Maryland, to take part in the march, and said it was even more important to her after a recent trip to the part of Europe where her family comes from, where she learned about their experience in the Holocaust.

“I just felt when I got back and just started to see everything, that this is the littlest thing that I could do to start to show action. I’ve done a lot of protests but never this type of event before."

Anti-Semitism is “growing so quickly and it’s just frightening the speed ... it just seems very real and very possible that this could be the start of something and that we need leadership to speak out against hate more than they currently are,” she said.

Marchers carried signs saying “No hate in our state” and “Always here without fear.”

Cuomo, a Democrat, announced a state grant program that gives out funding to improve security measures against hate crimes at religious-based organizations would have an additional $45 million available, and said a state hotline had been created for people to call if they experience discrimination.