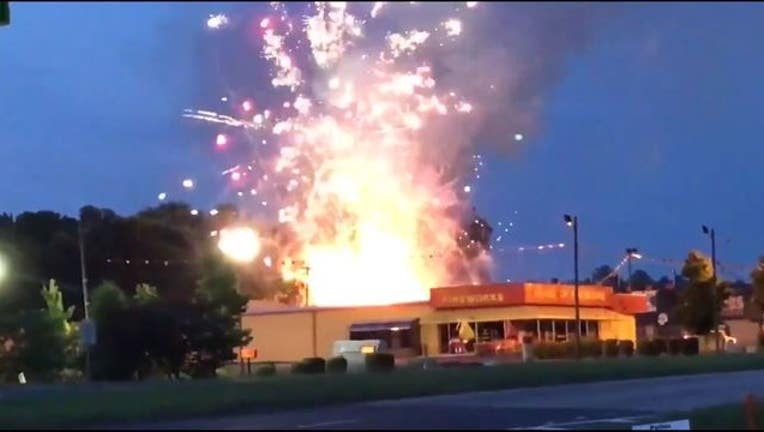 FORT MILL, S.C. - Firefighters in Fort Mill had to dodge exploding rockets to douse a spectacular fire that destroyed at least two containers of fireworks stored for sale on the Fourth of July.

The fire broke out around 5:45 a.m. Thursday, July 4 at the Davey Jones Fireworks located at 3420 US-21. According to the York County Sheriff's Office, the fire started in containers outside the store.

The blaze provided for an impressive, though sparsely attended show as shells and rockets burst through the metal containers, sending colorful showers into the air.

"I was pretty shocked. I thought it was a sales thing or display for the 4th then I saw the flames out of the top. I don't think people realized it was an actual working fire," Michael Stechschulte said.

Firefighters were actively working to extinguish the large flames as multiple fireworks exploded.

Fire officials on scene called the incident "A once in a lifetime fire."

The Davey Jones Fireworks building wasn't damaged. It's unclear how much product was lost when the storage containers went up in flames. No word on what caused the fire at this time.

Carowinds Blvd. from Hwy 51 to the Interstate-77 Exit ramp was closed to traffic for a couple hours. It reopened around 8:10 a.m. Thursday.