Amanda Edwards said she went into the water at Ocean View Beach in Norfolk, Virginia, and ended up with a flesh-eating bacteria.

NORFOLK, Va. - A woman said she contracted a flesh-eating bacteria that made it difficult to walk after briefly swimming at a beach in Virginia.

On June 29, Amanda Edwards said she went into the water at Ocean View Beach in Norfolk “for about 10 minutes” to cool off. Two days later, Edwards noticed a red bump on her leg, which eventually got bigger.

She also developed a headache and an upset stomach.

“I went to the doctor because it started spreading up my leg and it was really red,” Edwards said, who lives in Hampton, Virginia. “It felt super warm to touch and it started to get very hard to walk.” 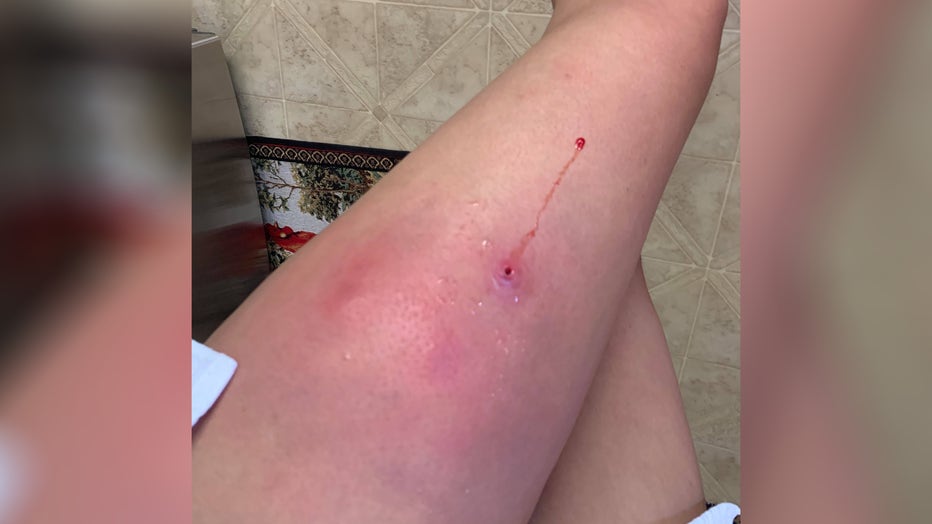 A photo shows the infection in Amanda Edwards' leg. The Virginia resident was prescribed antibiotics as part of her treatment. (Photo credit: Amanda Edwards)

Doctors diagnosed Edwards with a staph infection. According to the Centers for Disease Control and Prevention, breaks in the skin can allow bacteria to enter, including through cuts and scrapes, burns and insect bites.

Edwards said she wasn’t aware of a specific cut on her leg or foot but shaved her legs before going to the beach.

Doctors had to drain pus out of her leg and then stuffed it with gauze. The next day, Edwards said they removed the gauze and she was left with a hole in her leg, which started to drain more pus.

She was given cream and prescribed an antibiotic as part of her treatment.

According to WTKR-TV, there were swim advisories issued around the time Edwards visited the beach. However, Edwards said there weren’t any warning signs posted in the area about swimming.

She urged people planning a trip to the beach to do research before getting into the water. The Virginia Department of Heath posts its swim advisories online.

“The message I have for everyone is to please check the news and any websites you can because it was a very bad experience for me,” she said.