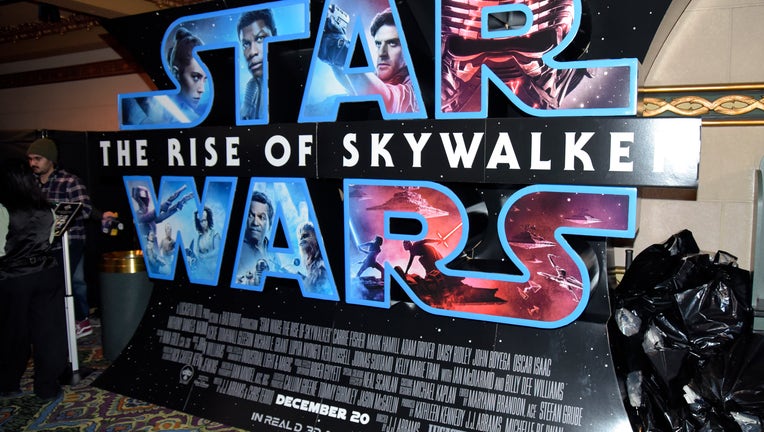 HOLLYWOOD, CALIFORNIA - DECEMBER 19: A "Star Wars: The Rise Of Skywalker" sign at the Star Ward Marathon hosted by Nerdest at the El Capitan Theater on December 19, 2019 in Hollywood, California. (Photo by Michael Tullberg/Getty Images)

LOS ANGELES - Plenty of force was with “Star Wars: The Rise of Skywalker" on its first night in theaters, but it fell short of the two previous films in the trilogy.

“The Rise of Skywalker” brought in an estimated $40 million in North America in its Thursday night previews, the fifth biggest Thursday opening ever.

The first film, “Star Wars: The Force Awakens,” earned $57 million its Thursday night previews in 2015, at the time the biggest of all time. It was topped by the $60 million take of “Avengers: Endgame” earlier this year.

The second film in the trilogy, “Star Wars: The Last Jedi," had a $45 million tally on its opening Thursday night in 2017.

“The Rise of Skywalker,” with “The Force Awakens” director J.J. Abrams back at the helm after Rian Johnson directed “The Last Jedi,” didn't appear to be affected by bad critic reviews. The film scored just 58% with critics on Rotten Tomatoes compared to 98% for “The Last Jedi,” but its fan score is 85%.

The third film stars Daisy Ridley, John Boyega, Oscar Isaac, Adam Driver and Carrie Fisher and is expected to bring in $200 million by the end of the weekend.