The history behind Iowa as the first presidential caucus

In just over a month on Feb. 3, Iowans will gather as they do every four years on what is usually a frigid cold night, to take part in the nation’s first presidential caucus.

DES MOINES - In just over a month on Feb. 3, Iowans will gather as they do every four years on what is usually a frigid cold night, to take part in the nation’s first presidential caucus.

But some voters around the nation are still confused as to what exactly a caucus is.

“They are basically group meetings under a single roof, whereas a primary election looks most like any election - people go into the polls on election day,” he continued. 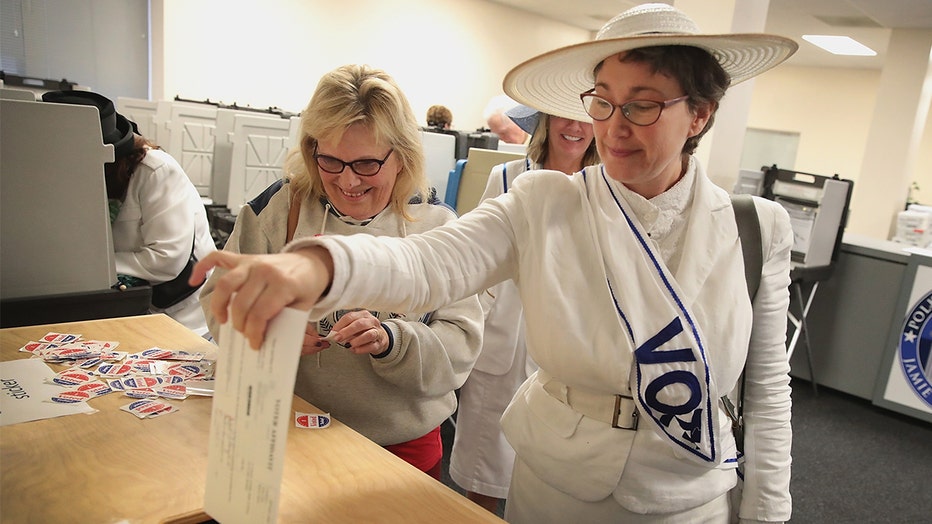 A woman dressed as a suffragette casts her ballot for the midterm elections at the Polk County Election Office on Oct. 8, 2018 in Des Moines, Iowa. (Photo by Scott Olson/Getty Images)

But instead of going to the polls, people from the same party will hold a series of meetings to convince other voters to support their candidate.

“I actually really like the system that Iowa has with the caucuses, I think it’s absolutely fascinating, it gets people of the same neighborhood together to choose a nominee,” said Democratic strategist Matt Littman.

The Iowa Caucus became prominent as a nominating contest after then little-known candidate Jimmy Carter won in 1976 — and later went on to win the White House.

Ever since, most campaigns will pour huge resources into Iowa to make a first, second or even third place finish, which they hope will propel them to more wins in the primaries that follow.

This year, there has been some controversy over whether the state, which is predominantly white, is representative of the rest of the country — and whether the date of the caucus should be changed.

“I don’t believe that forever we should be married to Iowa and New Hampshire going first and that’s just the truth of the way I see it,” said Julian Castro, a Democratic presidential candidate.

But for now, the party officials have not signaled any willingness to change the order of the caucus from being first in line. Political observers also point out its relevance was felt in just the last presidential election.

“Certainly Donald Trump’s performance, which shocked a lot of people in 2016 launched his campaign – which was a very improbable campaign from the very beginning,” Baker said.

Subsequently, many have been critical of the strategy of former New York Mayor Michael Bloomberg, who is skipping Iowa and New Hampshire to concentrate instead on Super Tuesday. He’s waiting for that date in March, when over a dozen states will hold contests, to make a play for votes.

Bloomberg, who has long considered a White House bid, sits atop a sprawling business empire and is worth more than $50 billion, easily making him the wealthiest candidate in the contest.

He has been laying the groundwork for a campaign for months and has flooded primary states with over $100 million worth of radio and TV advertising since entering the race last month.