Area 51, also known as Homey Airport, is a remote outpost of the Edwards Air Force Base located about 125 miles from Las Vegas. Its current primary purpose remains classified.

LINCOLN COUNTY, Nev. - More than 250,000 people have signed up to attend a Facebook event planning a raid on Area 51 in southern Nevada to “see them aliens.”

According to the event, titled, “Storm Area 51, They Can't Stop All of Us,” a group of alien hunters will meet at 3 a.m. on Sept. 20 near the top-secret U.S. Air Force Base to coordinate a plan of attack to reveal the truth behind the curtain.

From there, the group will “Naruto run” with their arms stretched behind them like Naruto Uzumaki in the Japanese anime series “Naruto,” and therefore “move faster than their bullets.”

The joke event is hosted by “S***posting cause im in shambles,” a page that posts memes, and SmyleeKun, a guy who streams video games on Twitch.

“Let’s see them aliens,” the event hosts wrote in an apparent effort to rally the troops. 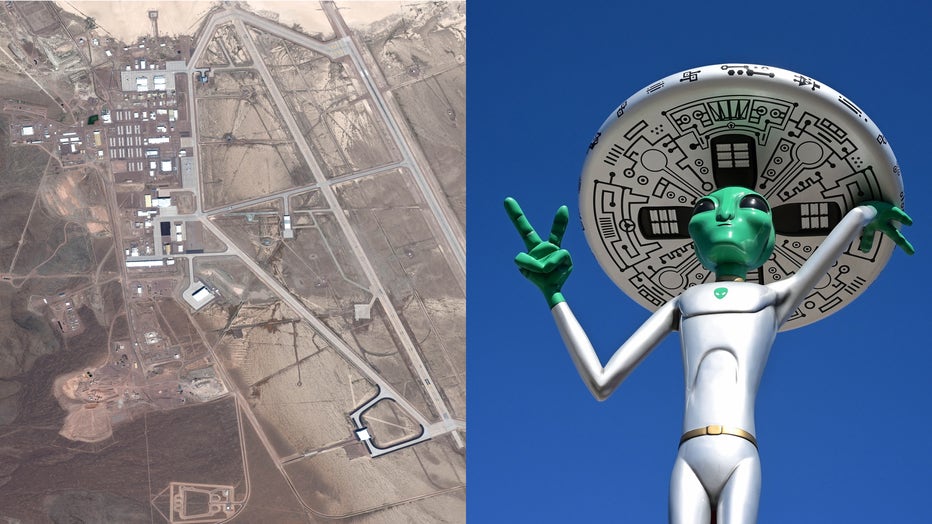 The U.S. Air Force facility commonly known as Area 51 is shown in a satellite image, alongside an alien sculpture in Baker, California, also known as the “Gateway to Area 51.” (Photo credit: DigitalGlobe and FREDERIC J. BROWN/AFP/Getty Images).

Area 51, also known as Homey Airport, is a remote outpost of the Edwards Air Force Base located about 125 miles from Las Vegas. The base’s current primary purpose remains classified.

In 1955, the mysterious area was chosen by the Central Intelligence Agency as a testing site for the super-secret Lockheed U-2, a high-altitude reconnaissance aircraft. In 2013, the CIA officially acknowledged the existence of Area 51 by declassifying documents detailing the history of both the U-2 and OXCART projects.

Still, the secrecy surrounding the base has made Area 51 the subject of many conspiracy theories for decades — including the storage of crashed alien spacecraft, meetings with extraterrestrials or the development of time travel.

Will anyone take the “Storm Area 51” Facebook event seriously and actually show up at the heavily-guarded site with 24-hour surveillance?

That remains to be seen, but the truth is out there.

RELATED: Take me to your beaches: UFO cruise is here to help you find the truth