Some of the US soldiers who were involved in the security operation at Kabul airport during recent evacuations were welcomed home at Fort Drum, New York, on September 6. (Credit: 2nd Brigade Combat Team, 10th Mountain Division via Storyful)

Video shared of the ceremony shows the "Polar Bears" of the 4th Battalion, 31st Infantry, filing into a building as friends and family applaud and cheer.

The commander of the 10th Mountain Division, Maj. Gen. Milford H. Beagle commended the soldiers’ leadership and thanked them for their service in Afghanistan.

"Thank you for doing your duty, which your nation asked you to do. Thank you all for making every single one of us proud of every one of you standing in this formation," he said. 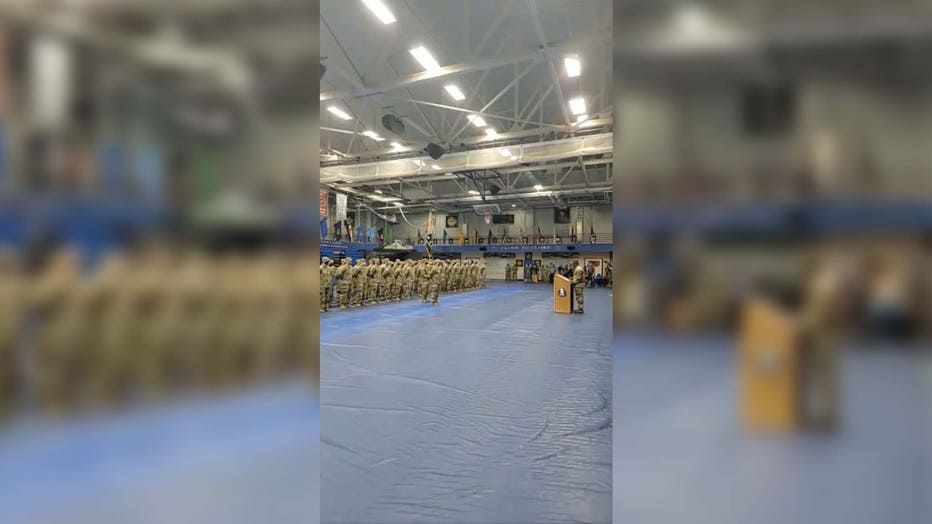 Some of the U.S. soldiers who were involved in the security operation at Kabul airport during recent evacuations were welcomed home at Fort Drum, New York, on Sept. 6.

"Hug them as tight as you want to hug them, because now they’re home," Beagle said.

As the ceremony ended, family and friends joined the soldiers on the floor to greet them.

On Aug. 30, the last five C-17 military aircraft took off from the Kabul airport to bring home the last of America’s soldiers.

For the U.S. military pilots and aircrew about to make their final takeoffs out of Afghanistan, the sky was lit up with fireworks and sporadic gunfire and the airfield littered with battered shells of airplanes and destroyed equipment. Stray dogs raced around the tarmac. And Taliban fighters, visible in the darkness through the green-tinged view of night vision goggles, walked the airfield waving an eerie goodbye.

Lined up on the runway at the Kabul airport were the five last C-17s to leave the country after a chaotic and deadly airlift evacuation that marked the end of America’s involvement in the Afghanistan war. In the final hours, there were no more rocket defense systems to protect them on the runway, and no one in the airport control center to direct them out.

In the final hours, there were no more rocket defense systems to protect them on the runway, and no one in the airport control center to direct them out.

"It just looked apocalyptic," said Air Force Lt. Col. Braden Coleman, who was in charge of monitoring the outside of his aircraft for artillery fire and other threats. "It looked like one of those zombie movies where all the airplanes had been destroyed, their doors were open, the wheels were broken. There was a plane that was burned all the way. You could see the cockpit was there, and the whole rest of the plane looked like the skeleton of a fish."

Maj. Gen. Chris Donahue, commander of the U.S. Army 82nd Airborne Division, had been the last soldier to walk up the ramp on the final C-17 to depart. He had been in charge of security for the evacuation mission. Soon after the aircraft were in the air, he sent his own message: "Job well done. Proud of you all."

Crammed onto the floor of the aircraft, exhausted troops found places to sleep. "Everyone was kind of sitting on top of each other — whatever we could do to have them get them on the aircraft and get them out," said Air Force Capt. Kirby Wedan.

Within 30 minutes, she said, most on her plane were asleep. Coleman agreed.

RELATED: Taliban paints its flag on outside wall of what was US embassy in Kabul

"I walked downstairs and they warned me not to go to the bathroom because there were too many people in front of the lab door," said Coleman. "There was one guy who had a box of water bottles that he was using for a pillow. I don’t know how that could have been comfortable. But, hey, he was fast asleep."

Their flight to Kuwait was about four hours long. Coleman said his plane was lucky enough to have extra toilets. Wedan’s had just one — but her crew passed out candy.

"They’re tired and they’re resting now. But I think, for two and a half weeks, you really saw why it was that a lot of us joined," said Coleman, who enlisted in 2001 after the Sept. 11 attacks that triggered the U.S. invasion into Afghanistan. "To see everybody step up to make this happen in the amount of time that it took to happen, to move 124,000 people out in less than three weeks. I mean, I couldn’t be prouder to be a C-17 pilot today."

The Associated Press and Storyful contributed to this story.