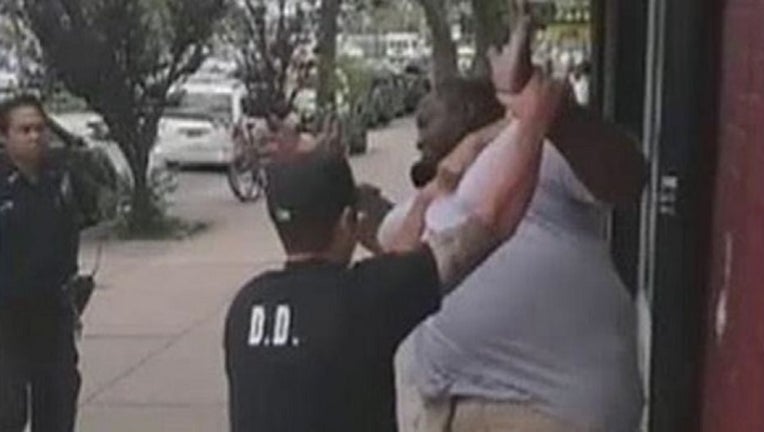 The announcement comes one day before the five-year anniversary of Garner's death.

A timeline of key events:

July 17, 2014: Eric Garner dies in a confrontation with Officer Daniel Pantaleo placing him in what appeared to be a chokehold. Police had suspected him of selling loose, untaxed cigarettes on the street on New York City's Staten Island. The confrontation is caught on amateur video, including Garner's words "I can't breathe," which become a rallying cry among protesters.

Sept. 19, 2014: Dr. Michael Baden, a forensic pathologist hired by Garner's family, agrees with findings that a chokehold caused Garner's death. Patrick Lynch, the president of the Police Benevolent Association, says that Pantaleo used a "seatbelt" maneuver and that the neck compressions were likely caused by lifesaving medical procedures.

Nov. 21, 2014: Pantaleo testifies to a grand jury weighing whether to indict him.

March 19, 2015: A judge refuses to release testimony heard by a grand jury that declined to indict Pantaleo.

July 30, 2015: An appeals court says the public can't see the testimony a grand jury weighed before declining to indict Pantaleo.

July 11, 2016: Garner's siblings lend their voices to a song titled "I Can't Breathe" that was released for the second anniversary of his death, with proceeds going to the nonprofit Garner Way Foundation, founded by his family to educate young people about race-linked law enforcement injustice.

June 21, 2017: Garner's family, along with Al Sharpton, meet privately with Justice Department officials. They are told the investigation is still active but are frustrated that federal authorities still haven't decided whether to prosecute any officers.

July 16, 2018: The New York Police Department says it will allow disciplinary proceedings against Pantaleo, saying it's run out of patience with federal authorities' indecision.

Dec. 6, 2018: Administrative judges announce Pantaleo will face an NYPD disciplinary trial in May 2019.

May 13, 2019: After many delays, the disciplinary trial begins for Pantaleo.

May 14, 2019: The NYPD official in charge of training recruits says the restraint technique Pantaleo used on Garner "meets the definition" of a chokehold. The practice was banned in the 1990s.

June 6, 2019: The disciplinary hearing for Pantaleo ends. It can take up to three months before an administrative judge recommends a punishment to the police commissioner. Federal authorities have been silent about where they are on a decision.

July 16, 2019: Federal prosecutors say they will not bring charges against Pantaleo, a decision made one day before the five-year anniversary of Garner's death.