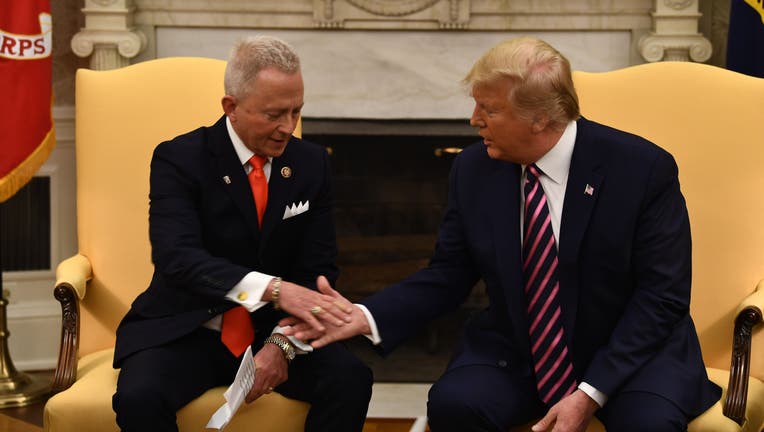 US President Donald Trump(R) shakes hands as he meets with Rep. Jeff Van Drew (D-NJ) in the Oval Office at the White House on December 19, 2019 in Washington,DC. (Photo by Brendan Smialowski / AFP) (Photo by BRENDAN SMIALOWSKI/AFP via Getty Images)

WASHINGTON - President Donald Trump announced Thursday that Rep. Jeff Van Drew, a New Jersey Democrat who broke with his party to vote against Trump's impeachment, is becoming a Republican.

“Jeff will be joining the Republican Party," Trump announced during an Oval Office appearance with Van Drew, who t old his staff over the weekend that he would become a Republican.

Van Drew on Wednesday voted against the articles of impeachment as a Democrat, a move that aided GOP attempts to depict Democrats as divided on the matter while Republicans voted unanimously against impeachment.

“I believe that this is just a better fit for me,” Van Drew said.

House Speaker Nancy Pelosi said Thursday she had not had conversations with Van Drew about his thinking. Asked by reporters whether she had advice for him, she said, “nothing. Zero.”

“Congressman Jeff Van Drew is very popular in our great and very united Republican Party," the president wrote. “It was a tribute to him that he was able to win his heavily Republican district as a Democrat. People like that are not easily replaceable!"

“I've told him many times he's more than welcome to join the Republican Party," McCarthy said. Asked if he's offered Van Drew assistance in getting a committee assignment or hiring staff, McCarthy said, “I'll help him with whatever he needs."