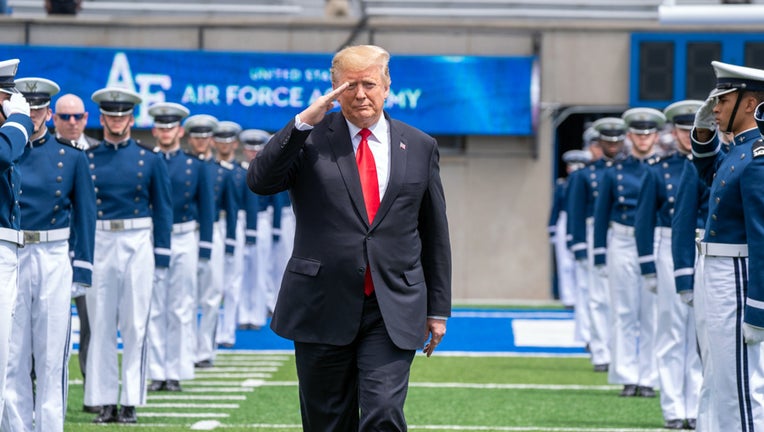 Speaking at the U.S. Air Force Academy commencement, Trump praised the class of "rock-ribbed American patriots" and paid tribute to them for choosing "a harder path and a higher calling" to protect the United States.

Trump used the opportunity to highlight his administration's investments in defense spending, saying, "Our military is stronger, mightier and more powerful with all of that new aircraft than ever before."

He said these investments would ensure the country can "Deter any aggressor and thrash any foe."

Trump was introduced by Heather Wilson, a graduate of the academy making her final public appearance as secretary of the Air Force.

"There is nation outside of this stadium depending on you," she told graduates.

Gen. David Goldfein, the Air Force chief of staff, warned that "Many of you will face the ultimate test in combat as together we defend this great experiment called democracy." But he said they were up to the task.

Trump said he would remain at the ceremony to congratulate every one of the nearly 1,000 new second lieutenants, as well as view the customary hat-toss and Thunderbirds fly-by. He joked that he was given the opportunity to leave early, but turned it down.