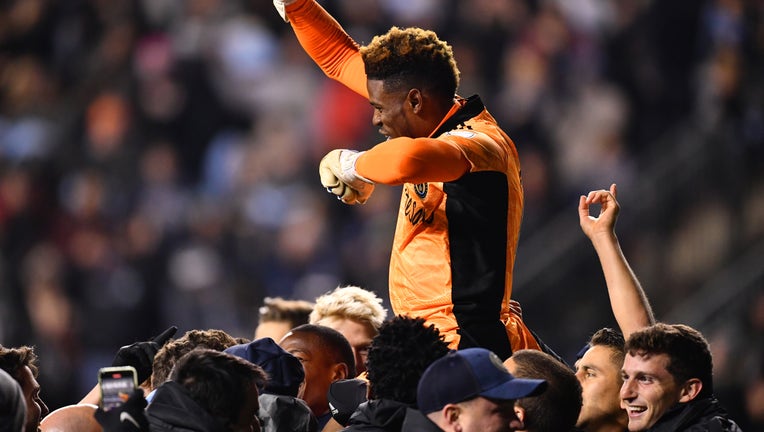 CHESTER, PA - NOVEMBER 28: Philadelphia Union keeper Andre Blake (18) celebrates with teammates after the game between Nashville SC and Philadelphia Union on November 28, 2021 at Subaru Park in Chester, PA. (Photo by Kyle Ross/Icon Sportswire via Get

Philadelphia won the shootout 2-0 after the teams remained tied at 1 after 30 minutes of overtime.

Philadelphia will face the winner of the semifinal Tuesday night between New England and New York City.

On the first attempt of the shootout, Blake dove to his right to smother a shot from Hany Mukhtar. After Jack Elliott scored for the Union, Blake dove left to deny Anibal Godoy. Joe Willis gobbled up a shot from Sergio Santos to keep Nashville alive.

Alex Muyl shot wide for Nashville and 18-year-old Jack McGlynn stroked a left-footed shot past Willis to give the Union a 2-0 lead. It ended when Walker Zimmerman shot wide on Nashville's fourth attempt.

Mukhtar opened the scoring for Nashville in 38th minute. Eric Miller was left unchallenged to launch a long centering pass that found an open Mukhtar for a header from just outside the goal box.

Daniel Gazdag tied it in first-half stoppage time. His initial shot on a Philadelphia set piece was blocked, but he followed the carom and, with his back to the goal, right-footed a shot into the lower right corner.