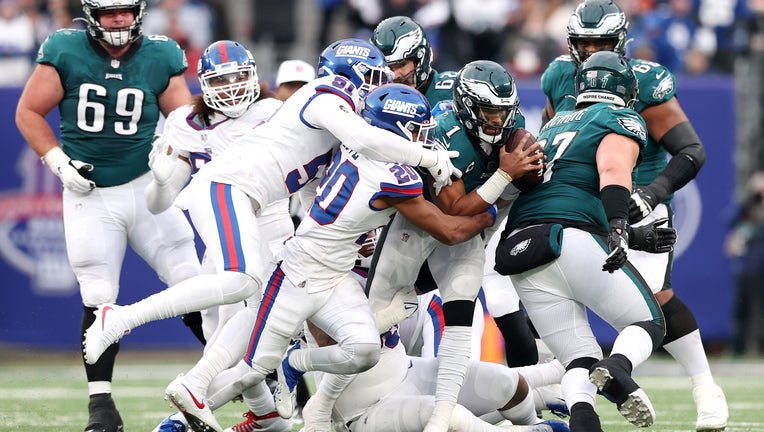 EAST RUTHERFORD, N.J. - The New York Giants' defense rose up to intercept Jalen Hurts three times and held Philadelphia to a season-low in points in beating the error-prone Eagles 13-7 Sunday.

Daniel Jones hit Philadelphia native Chris Myarick with a 1-yard score and Graham Gano kicked field goals of 35 and 39 yards as the Giants (4-7) somewhat responded to the firing of offensive coordinator Jason Garrett by ending the Eagles' two-game winning streak.

The Eagles (5-7) were their own worst enemy. They had four turnovers, with running back Boston Scott losing a fumble that Julian Love recovered at the New York 40 with 1:34 to play.

The Eagles had one more chance in the final 1:11. They got a first down at the Giants 27 and had to spike the ball. Hurts threw three passes and nearly had Jalen Reagor for a TD on second down with a sideline pass the receiver got his hands on before dropping. A pass to Reagor at the goal line on fourth-and-10 also was incomplete.

Hurts had thrown five interceptions all season until finding cornerback Darnay Holmes, linebacker Tae Crowder and safety Xavier McKinney. The one by Crowder hurt most, a goal-line pick on the final play of the first half.

Scott had scored on a 1-yard run on the first play of the fourth quarter to get Philadelphia within 10-7. However, the player who has seven career TDs against the Giants had the big miscue later on.

Gano added his longer field goal on a possession lasting 7:22 preceding the Scott fumble for the 13-7 lead.

Myarick, who played at Temple, made his first career catch a very productive one midway through the third quarter for the margin of victory.

The Giants' defense, which did little against Tom Brady and the Bucs on Monday night, got the team's first opening-half shutout since December 2018 when it intercepted Hurts twice in the half. Crowder made a goal-line interception on a third-and-goal from the 1. It marked the first time the Eagles had not scored in the opening half this season.

Gano also missed from 51 yards, ending a success streak of 12 in a row.

Eagles center Jason Kelce missed the second quarter with a knee injury and returned in the third. He made his 117th consecutive regular-season start. Two holding penalties by backup Nate Herbig hurt on the last drive of the half, including one that nullified a 21-yard TD run by Scott.

Eagles: return to MetLife Stadium next Sunday to face the Jets.

Giants: travel to Miami to play the Dolphins on Sunday, the first of two straight on the road.