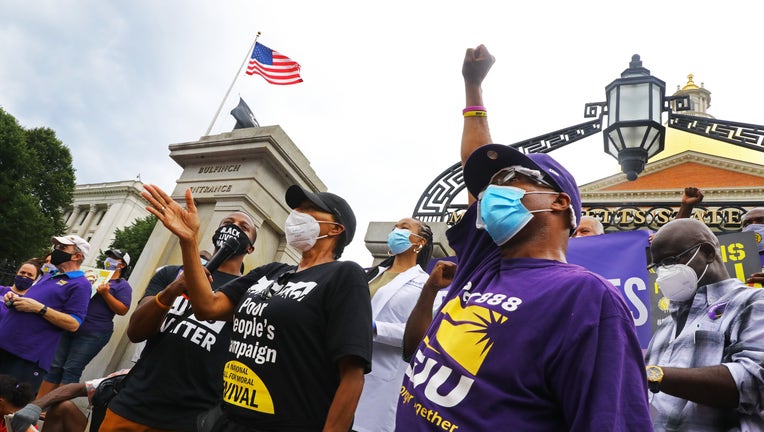 BOSTON - JULY 20: As activist Savina Martin, center, with the People's Forum, speaks, Anthony Meeks, with SEIU Local 888, throws up a fist during an SEIU members rally in front of the State House in Boston on "a day of reckoning" for Black Lives on J

NEW YORK - Ahead of Labor Day, unions representing millions across several working-class sectors are threatening to authorize work stoppages in support of the Black Lives Matter movement amid calls for concrete measures that address racial injustice.

In a statement first shared with The Associated Press, labor leaders who represent teachers, autoworkers, truck drivers and clerical staff, among others, signaled a willingness Friday to escalate protest tactics to force local and federal lawmakers to take action on policing reform and systemic racism. They said the walkouts, if they were to move forward with them, would last for as long as needed.

"The status quo -- of police killing Black people, of armed white nationalists killing demonstrators, of millions sick and increasingly desperate -- is clearly unjust, and it cannot continue," the statement says. It was signed by several branches of the American Federation of State, County and Municipal Employees, the Service Employees International Union, and affiliates of the National Education Association.

The broader labor movement has been vocal since the May 25 killing of George Floyd, a handcuffed Black man who died after a white police officer pressed his knee into Floyd's neck for nearly eight minutes during an arrest over counterfeit money. The death of Floyd in Minneapolis set off an unprecedented surge of protests and unrest from coast to coast this summer. In July, organized labor staged a daylong strike with workers from the service industry, fast-food chains and the gig economy to call out the lack of coronavirus pandemic protections for essential workers, who are disproportionately Black and Hispanic.

Now, in the wake of the August shooting of Jacob Blake, who was critically wounded by a white police officer in Kenosha, Wisconsin, the union leaders say they are following the lead of professional athletes who last week staged walkouts over the shooting. Basketball, baseball, and tennis league games had to be postponed. Some athletes resumed gameplay only after having talks with league officials over ways to support the push for policing reforms and to honor victims of police and vigilante violence.

"They remind us that when we strike to withhold our labor, we have the power to bring an unjust status quo to a grinding halt," the union leaders said in the statement.

"We echo the call to local and federal government to divest from the police, to redistribute the stolen wealth of the billionaire class, and to invest in what our people need to live in peace, dignity, and abundance: universal health care and housing, public jobs programs and cash assistance, and safe working conditions," the statement reads.

Among the supportive unions are ones representing Wisconsin public school teachers who, ahead of the mid-September start of the regular school year, urged state legislators to take on policing reforms and systemic racism.

"We stand in solidarity with Jacob Blake and his family, and all communities fighting to defend Black lives from police and vigilante violence," Milwaukee Teacher's Association president Amy Mizialko told the AP.

"Are we striking tomorrow? No," said Racine Educator United president Angelina Cruz, who represents teachers in a community that abuts Kenosha. "Are we in conversation with our members and the national labor movement about how we escalate our tactics to stop fascism and win justice? Yes."

The Nonprofit Professional Employees Union, which represents several hundreds of professionals working at more than 25 civil rights groups and think tank organizations, told the AP it signed onto the union statement because "the fights for workers' rights, civil rights, and racial justice are inextricably linked."

At the federal level, the Democrat-controlled House of Representatives has already passed the George Floyd Justice In Policing Act, which would ban police use of stranglehold maneuvers and end qualified immunity for officers, among other reforms. The measure awaits action in the Senate.

Meanwhile, officials who serve on governing bodies in more than a dozen major U.S. cities, including Seattle, San Francisco, New York City, and Austin, Texas, have voted to defund their police departments and reallocate the money to mental health, homelessness, and education services.

Although some unions have a history of excluding workers on the basis of gender and race, the marriage between the racial justice and labor movements goes back decades. That alliance was most prominently on display during the 1963 March on Washington for Jobs and Freedom, which featured the visions of the Rev. Martin Luther King Jr. and Rep. John Lewis and was organized by A. Philip Randolph, a Black icon of the labor movement.

Today, Black workers are more likely to be unionized than any other segment of the workforce as a result of decades of collaboration between labor and civil rights activists, said New York University professor and civil rights historian Thomas Sugrue.

"That connection has only intensified because of the importance of workers of color, particularly African Americans, in the labor movement," Sugrue said.
Public and private employers are faced with a "Which side are you on?" moment due to growing support for the BLM movement, said Maurice Mitchell, national director of the Working Families Party and a leading organizer in the Movement for Black Lives, a national coalition of 150 Black-led organizations.

"If I was a decision-maker that was considering whether or not to meet the demands of the unions, I would be scared," Mitchell said. "This movement is spreading. We've been on the streets consistently, we're building on the electoral front, and now we're seeing this conversation at the highest levels of labor."