CDC Director Dr. Rachelle Walensky pleaded with Americans to continue mask-wearing and refrain from nonessential travel as the coronavirus continues to infect more than 50,000 Americans each day. She cited escalating rates of travel, including around college spring break.

LOS ANGELES - As vaccination efforts in the U.S. ramp up, many states have begun reopening their economies and preparing for the expected travel boom that is sure to come.

A weekly survey, called the Coronavirus Travel Sentiment Index, conducted by Destination Analysts, reported Monday that nearly 60% of Americans say they intend to travel for leisure in the next three months.

Additionally, 84% of survey participants said they have tentative plans to travel in 2021.

The renewed optimism for traveling comes as President Joe Biden said he aims for the country to get "closer to normal" by the Fourth of July.

Last week, he directed all states to lift qualifications for vaccinations by May 1, and expand the number of places and categories of people who can give shots. His aim: let Americans gather at least in small groups for the Independence Day holiday.

Already across the U.S., air travel is recovering more quickly from the depths of the pandemic, and it is showing up in long airport security lines and busier traffic on airline websites.

The Transportation Security Administration screened more than 1.3 million people both Friday and Sunday, setting a new high since the coronavirus outbreak devastated travel a year ago. Airlines say they believe the numbers are heading up, with more people booking flights for spring and summer.

"Our last three weeks have been the best three weeks since the pandemic hit, and each week has been better than the one prior," American Airlines CEO Doug Parker said Monday.

RELATED: As COVID-19 vaccinations ramp up, AAA warns 2021 travel will likely be a different experience for many

The TSA also said on Tuesday that it has launched an assessment of new technology using Ultraviolet-C (UV-C) light to disinfect airport checkpoint bins to help control the incoming traffic and keep the spread of COVID-19 at bay.

But while the number of people passing through airport checkpoints has topped 1 million for four straight days and the 7-day rolling average is the highest in the pandemic era, passenger traffic is still down more than 50% in March compared with the same period in 2019.

The German government on Monday urged citizens to limit travel amid the coronavirus pandemic as airlines reported a surge in bookings to traditional beach holiday destinations for Easter.

Budget airline Eurowings announced at the weekend that it is laying on hundreds of extra flights to Mallorca over the Easter period, and travel giant TUI said it is opening hotels on the island early after Germany’s disease control agency removed the Spanish island from its list of "risk areas."

While the requirement for people to quarantine on return from Mallorca and other Spanish holiday hotspots has now been lifted, the German government made clear it frowns on any such trips.

"The appeal is to avoid any not absolutely necessary travel," government spokesman Steffen Seibert told reporters in Berlin. A Foreign Ministry spokeswoman, Maria Adebahr, said that "the absence of a travel warning is no invitation to travel." 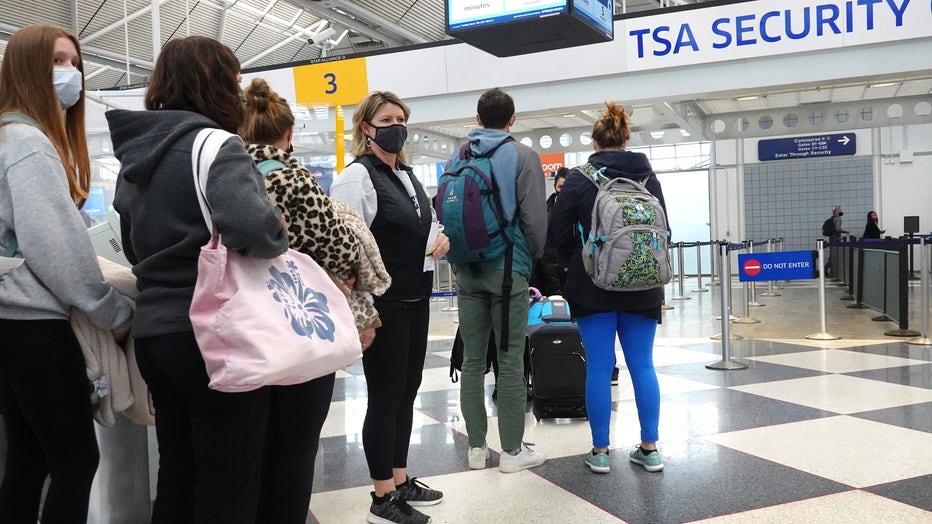 Hawaii also saw its busiest travel day this week since the start of the pandemic.

About 26,400 trans-Pacific and interisland travelers were screened by the state’s Safe Travels program on Saturday, the Honolulu Star-Advertiser reported Tuesday.

With the continued easing of coronavirus restrictions comes swaths of travelers gathering in tourist locations.

That video was posted over the weekend before Nevada Gov. Steve Sisolak announced his "Roadmap to Recovery" on Monday, which allows conventions, conferences, and trade show gatherings with 50 percent capacity if they submit a "Large Gathering COVID-19 Preparedness& Safety Plan Certification form.

The increased interest in travel comes after a year of normal life being upended by the ongoing coronavirus pandemic, forcing many to quarantine inside their homes.

Despite vaccinations ramping up across the country, medical experts, travel agencies and even colleges are urging Americans to be cautious and avoid unnecessary travel.

"The entire travel experience has been transformed by COVID-19. If you’re considering travel this year, it’s more important than ever to do your homework and be knowledgeable ahead of any trip to ensure both safety and pleasure," said Jana L. Tidwell, manager of Public and Government Affairs for The American Automobile Association, Mid-Atlantic. "As vaccines help boost consumer confidence to travel again, it’s still important to protect yourself and others and it’s required in many areas to wear masks and socially distance."

Dr. Rochelle Walensky, director of the U.S. Centers for Disease Control and Prevention, said the next two months are critical for the nation to prevent a possible next wave of COVID-19.

"There is so much that's critical riding on the next two months," Walensky said, speaking at a National League of Cities virtual conference (https://www.c-span.org/video/?509640-1/congressional-city-conference) last week. "How quickly we will vaccinate versus whether we will have another surge really relies on what happens in March and April."

The University of California, Davis said it is offering students $75 to be used for "staycations" to encourage them to avoid nonessential travel during spring break.

Students who choose to stay home during the March 22-26 break will get the money in gift cards. Student response has been "awesome," the university said in a statement.

"The idea behind this was to provide a positive incentive for students to follow public health guidance," Sheri Atkinson, associate vice chancellor for student affairs, told the Los Angeles Times.

Colleges around the country are scaling back spring break or canceling it entirely to discourage partying that could spread the virus and raise infection rates back on campus.

The seven-day rolling average for daily new deaths in the U.S. decreased over the past two weeks from 1,991 on March 1 to 1,356 on Monday, according to Johns Hopkins University.

But the decrease in cases and deaths doesn’t mean that the ongoing pandemic, which has killed more than 536,000 Americans, is suddenly over.

As coronavirus restrictions begin to ease in many states like Texas, which recently lifted its mask mandate and allowed businesses and facilities in the state to open at 100 percent capacity, medical experts are concerned about looming mutations of the virus that appear to have more resistance to vaccines.

Vaccine developer Novavax reported last week that its vaccine offers high levels of protection against the original coronavirus strain that causes COVID-19, but the vaccine’s efficacy is diminished by some coronavirus variants, including one that originated in South Africa.

Novavax announced on Twitter that its vaccine has 96% efficacy against the original strain of the coronavirus, according to a recent U.K. trial.

But the company said its vaccine is only 55.4% effective against the B.1.351 strain, first detected in South Africa in December. The South Africa strain has been reported in several states in the U.S.

A separate laboratory study published in February by Pfizer Inc/BioNTech, the first company to get emergency authorization for its COVID-19 vaccine, suggested that its current vaccine may generate a significantly less robust antibody response against the South Africa variant of the virus.

According to the in vitro study published in the New England Journal of Medicine (NEJM), lab results "indicated a reduction in neutralization," of the virus.

Evidence suggests that current vaccines still work against the variants, though perhaps not as well against a mutated version that first appeared in South Africa.

The concern is that vaccination efforts may not be able to keep up with the growing rate of people traveling outside their homes, adding to the potential for a deadly surge.

The reason medical experts are so worried about new variants is that mutations can make a virus more contagious, deadly, or resistant to vaccines and treatment.

Health experts are primarily concerned about three variants first detected in the United Kingdom, South Africa and Brazil. They seem to spread more easily and research is underway to see if they cause more serious disease.

Tracking these variants may prove to be more difficult if most of the country is acting like the pandemic isn't still ongoing, experts say. Masks, social distancing and hand washing are still the most effective weapons against COVID-19 besides the vaccine.

In the meantime, scientists are scanning virus samples taken from infected people to look for mutations through a process called genome sequencing. It’s the same method researchers have been using for years to study bacteria, plants, animals and humans.

Around the world, researchers have sequenced more than 500,000 genomes of the COVID-19 virus to date.

Viruses can mutate as they make copies of themselves after infecting a person. By sequencing virus samples over time, scientists can look for recurring changes in the genome.