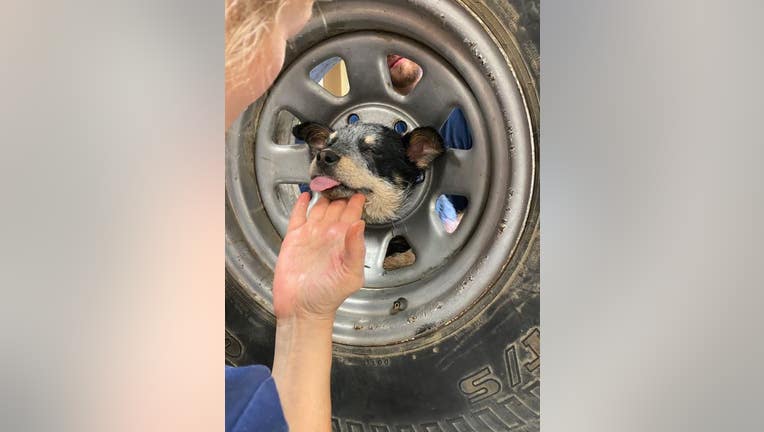 COACHELLA, Calif. - A cute and mischievous 3-month-old puppy was rescued by firefighters after getting her head stuck in a spare tire in Coachella on Wednesday.

According to The Riverside County Department of Animal Services, Officer Jose Cisneros responded to a call around 4:20 p.m. about an Australian cattle dog stuck inside a spare tire. They used oil to lubricate the puppy’s neck to try to slide her head out but her neck was too swollen.

Officer Cisneros transported the puppy to the Coachella Valley Animal Campus in Thousand Palms and was sedated in order to calm her, officials said.

Firefighters from the Riverside County Fire Department No. 69 in Rancho Mirage quickly arrived to the puppy’s rescue and used a saw to safely cut out a piece of the tire to open up enough room for her to slide out.

The puppy was nicknamed 'Wheelie Pup' by the crew, quickly ate after she was freed and continued to rest overnight, the department said.

The puppy is all smiles and can't wait to go home!

She will remain under observation until she returns to her rightful owners.