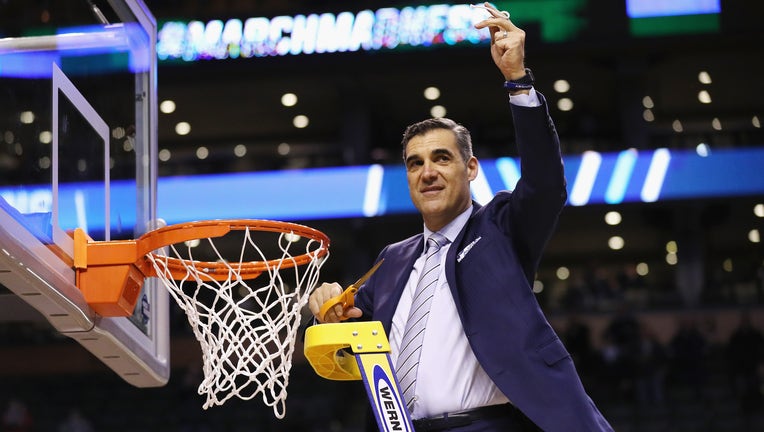 PHILADELPHIA - The final seconds of the 2016 national title game were some of the most dramatic in college basketball history.

North Carolina's Marcus Paige hit an off-balance 3-pointer to tie the game with 4.7 seconds left, only to be upstaged by Villanova's Kris Jenkins hitting a buzzer-beating, game-winning 3-pointer.

Amid all the drama, Villanova coach Jay Wright remained calm. When Jenkins let go of his shot, Wright nonchalantly said “Bang,” then walked over to shake Tar Heels coach Roy Williams' hand as if the Wildcats had just won an exhibition game, not a national championship.

Smooth as one of his designer suits, Wright turned Villanova into a national powerhouse during the 2010s, leading the Wildcats to two national titles while changing the way college basketball is played.

Wright's success on the outskirts of Philadelphia made him a runaway choice as men's coach of the decade. He received 16 of 24 votes from a panel of Associated Press poll voters, well ahead of Duke's Mike Krzyzewski with five votes. Gonzaga's Mark Few, Kentucky's John Calipari and Virginia's Tony Bennett had one each.

“Jay Wright’s resume speaks for itself with two national titles in the 2010s," ESPN analyst and AP voter Dick Vitale said. "He has developed a consistent winner and has enjoyed success on and off the court. He has a special winner’s mentality.”

Before he arrived, Villanova was known for upsetting Georgetown in the 1986 national championship game and the occasional trip to the NCAA Tournament.

Wright needed three years to build a foundation before Villanova broke through with a trip to the 2005 Sweet 16. An Elite Eight appearance followed the next year and the Wildcats reached the Final Four in 2009.

Villanova won its first national title under Wright in 2016 on Jenkins' shot and decimated the NCAA Tournament field in 2018, winning every game by double digits on its way to the national title.

“Honestly, we’ve had success because we’ve had really good players. We really have,” Wright said. "We’ve had really talented guys. You can see them all playing in the NBA and see what they did."

Wright was the one pulling the strings.

He arrived at Villanova in 2001 after a successful seven-year run at Hofstra, where he led the Pride to the NCAA Tournament his final two years.

Wright built the Wildcats slowly, bringing in players to fit his style while changing the program's culture. Even when Villanova became an elite program and could land higher-rated recruits, Wright still sought team-first players who fit his system.

Wright's success helped usher in an era of position-less basketball, where players can play multiple positions and nearly everyone on the roster can shoot from the perimeter.

"In my generation, coach Jay Wright’s changed basketball. He’s the one that kind of invented small ball, where your four man can shoot 3s," Texas Tech coach Chris Beard said at last year's Final Four. “They always have four guys on the floor that shoot. He’s transformed basketball. The way they play, we’re all kind of doing the same thing.”

With the success Wright had in the 2010s, it's no wonder coaches across the country are copying his blueprint.