FOX 29's Steve Keeley has the latest updates on the traffic project on the Walt Whitman Bridge.

PHILADELPHIA - The Delaware River Port Authority on Thursday announced a four-month repair project on the Philadelphia side of the Walt Whitman Bridge that will funnel traffic on I-76 to just one lane in each direction.

The Walt Whitman I-76 Corridor Rehabilitation Project will start on Monday and impact a stretch of the highway between Broad Street (Exit 349) and Passyunk Avenue (Exit 347), according to a release from the Port Authority.

Several ramps within the construction zone will be closed during the four-month timeframe as crews work to improve drainage and make repairs to concrete overpasses. 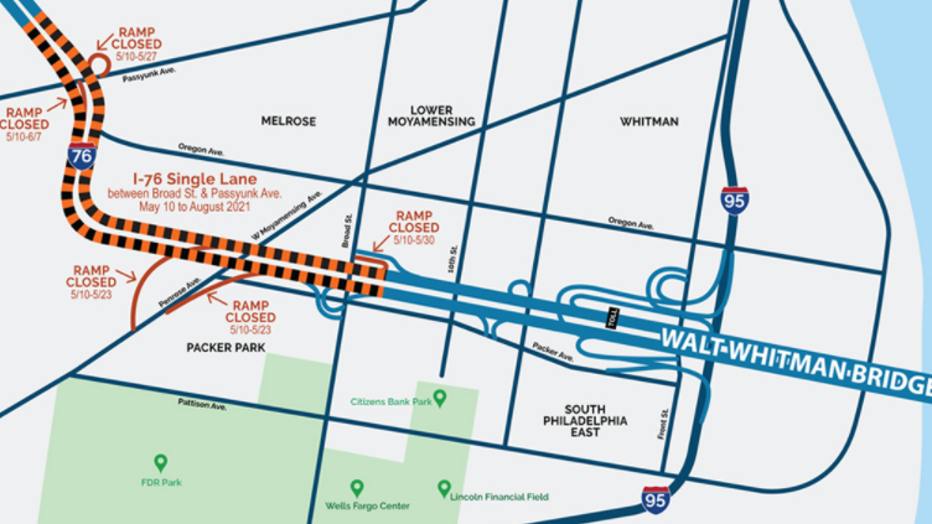 The following ramps will be closed starting Monday, according to the Delaware River Port Authority:

The Walt Whitman I-76 Corridor Rehabilitation Project began in 2020 and is expected to be completed in 2023, according to a release. The project has allocated more than $70M to rehabilitating about two miles of I-76 between the bridge's toll plaza and Passyunk Avenue.