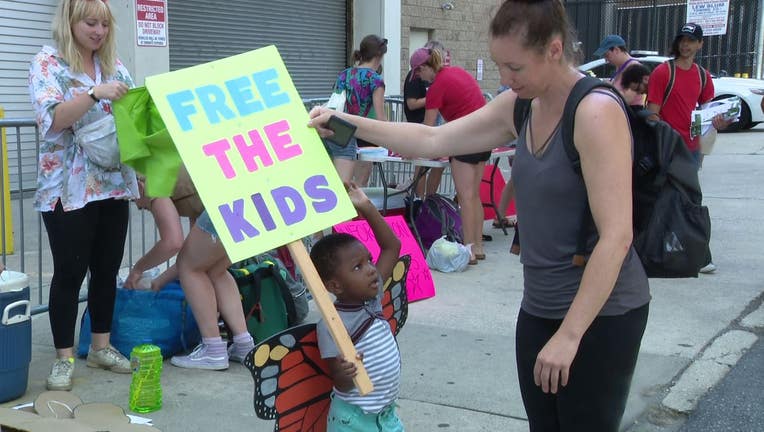 In July, protesters gathered in Philadelphia to rally against the Berks County detention center, which holds migrant children and parents.

HARRISBURG, Pa. - Pennsylvania's independently elected fiscal watchdog said Wednesday that his staff was repeatedly refused a tour of a Berks County facility that is one of three family detention centers in the United States that hold children and parents who are seeking asylum or entered the country illegally.

Auditor General Eugene DePasquale, a Democrat who is running for Congress, nevertheless said the federal government should stop the long-term detention of asylum seekers, and he urged Berks County to reconsider whether it wants to profit from the practice.

“No one being held at the Berks facility is facing any criminal charges, but the center still essentially functions as a jail in which adults and children, sometimes mere babies, are detained,” DePasquale told a news conference in his Capitol complex office building.

As of this week, one 6-year-old child has been held at the facility for 167 days, DePasquale said.

Pennsylvania's Department of Human Services inspects the facility monthly and has not reported a violation since June 2018, DePasquale said.

DePasquale said he did not know why his auditors were denied a tour, but he said the state should continue to inspect the facility to check on the conditions and ensure the safety of the children inside.

DePasquale also said the center appears to be routinely violating the Flores Agreement, a 1997 federal court settlement agreement that requires the release of children caught on the border within 20 days to relatives in the U.S. and says they can only be held in facilities licensed by a state.

Like many other Democrats, DePasquale argued that it is far more effective to release asylum seekers into the community, with certain measures for oversight, since the vast majority of them show up for court hearings as their asylum applications are considered.