WASHINGTON - In a joint demonstration of support for the Black Lives Matter movement, players, managers and coaches of the New York Yankees and Washington Nationals knelt in unison before the opening game of the 2020 baseball season, then stood for the national anthem Thursday night.

“We wanted to do something united, something together," Yankees slugger Aaron Judge said after New York's 4-1 victory, called in the sixth inning because of rain at Nationals Park.

“We’ve got a lot of guys in this clubhouse with different beliefs, different feelings, different walks of life and from different countries,” Judge said. "And we want to respect all that and as a team we came to the decision to kneel right before the anthem.” 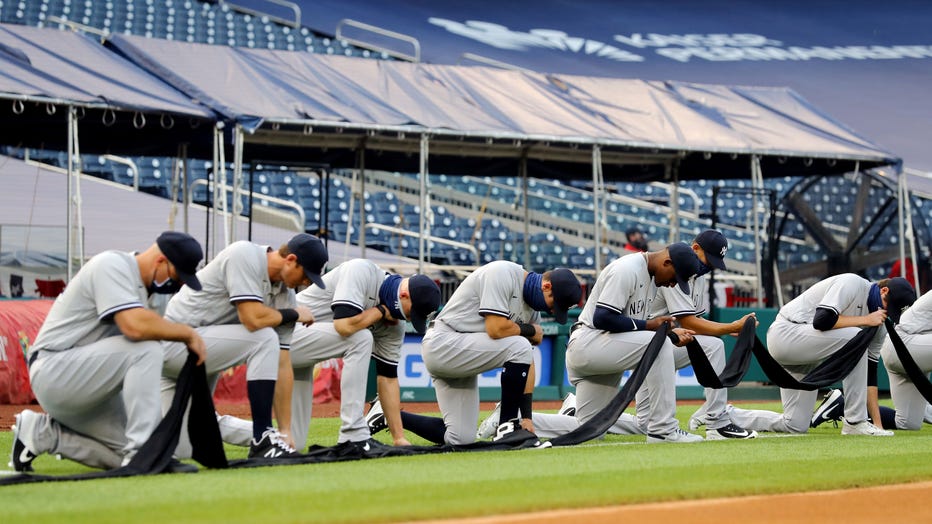 It was part of an opening day pregame ceremony in the nation’s capital that also featured references to the coronavirus pandemic -- including an off-the-mark first pitch by Dr. Anthony Fauci -- and the home team’s 2019 championship.

Fauci, the country’s top infectious disease expert, was invited by the Nationals to throw out the ceremonial first pitch -- a fitting choice during the current medical crisis. Wearing a mask on the mound, Fauci sent his toss well wide of home plate, and the ball bounced past his “catcher,” Doolittle.

Afterward, Fauci and Doolittle tapped gloves, instead of shaking hands.

RELATED: Fauci to testify next week to House panel on coronavirus

Without any spectators present to appreciate the celebrations, flags noting the Nationals’ first title were raised beyond right field and above the scoreboard, and “2019 World Champions” was written on a red mat that was wrapped around the batter’s boxes during pregame introductions.

Players from both clubs wore T-shirts saying Black Lives Matter during batting practice in Washington, and the letters “BLM” were stenciled into the back of the mound at the center of the diamond.

Then, in a poignant reference to the racial reckoning happening in the U.S., players and other members of both teams held a long black ribbon while standing spaced out along the two foul lines. After they placed the ribbon on the ground, everyone got on their knees. 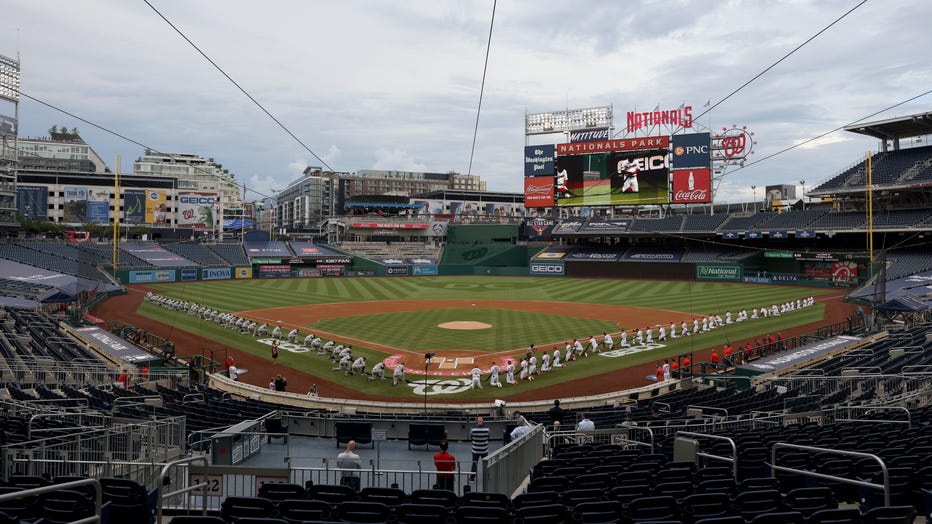 The New York Yankees and the Washington Nationals kneel during a moment of silence for Black Lives Matter prior to the game at Nationals Park on July 23, 2020 in Washington, D.C. (Photo by Rob Carr/Getty Images)

“We know there are issues in this country and we need changes. We need changes for the better. These guys all understand that,” Nationals manager Dave Martinez said. “This was for a major cause, we believe in it, and we did what we could.”

Hours later in Los Angeles, the Giants and Dodgers also held a black ribbon that wound along the baselines. 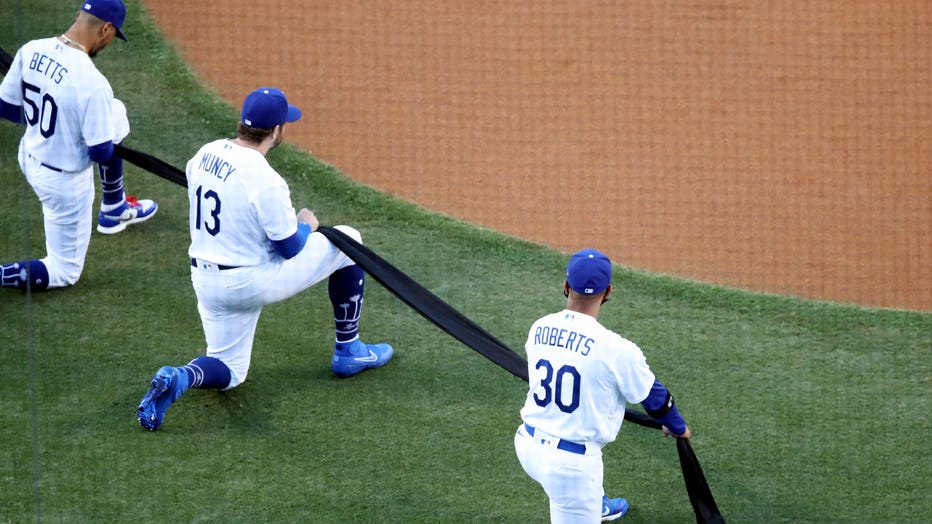 Manager Dave Roberts #30, Max Muncy #13 and Mookie Betts #50 of the Los Angeles Dodgers kneel and hold a black ribbon to show their support for social justice and diversity and inclusion during the pre-game ceremony prior to the game between the San

Dodgers outfielder Mookie Betts, who signed a 12-year, $365 million contract on Wednesday, and some of the Giants kneeled as anthem singer Keith Williams Jr. stood in the new center field seating at Dodger Stadium instead of the usual spot near home plate.In a video, 98-year-old Rachel Robinson, whose husband, Jackie, broke the major league color barrier in 1947, gave the traditional call: “It’s time for Dodger baseball.”

Yankees players decided Wednesday they wanted to kneel for 60 seconds before the anthem.

New York officials then asked Washington if that time could be added to the pregame script.

The Nationals decided they wanted to join the Yankees.

“It was important for us, and for the Yankees, that everybody bought in and we had full participation and presented a united front during that moment," Doolittle said. "Holding the ribbon, kneeling, to show support for the other athletes who have done it in other sports ... to show support for the movement of Black Lives Matter and ending police brutality and racism and injustice."