Westampton Township candidate defends himself for appearing in blackface

FOX 29's Brad Sattin spoke with Karl Eversmeyer who is defending himself after photos of him in blackface surfaced.

WESTAMPTON TWP., N.J. - A local township committee candidate is defending himself after photos surfaced of him appearing in blackface at a Halloween party in 2009. He says he is not dropping out of the race.

Karl Eversmeyer has been rallying for support trying to win a seat on the Westampton Township Committee, but he's suddenly on the defense after posting a photo on his Facebook page trying to explain why he was in blackface after local Democrats released a series of photos.

He says it was 10 years ago at a Halloween costume party, dressed as Kanye West with his wife dressed as Taylor Swift. They were poking fun at an infamous 2009 MTV Video Music Awards incident that had just occurred. All who attended the costume party, he says, were African Americans. He says he even won for best costume. 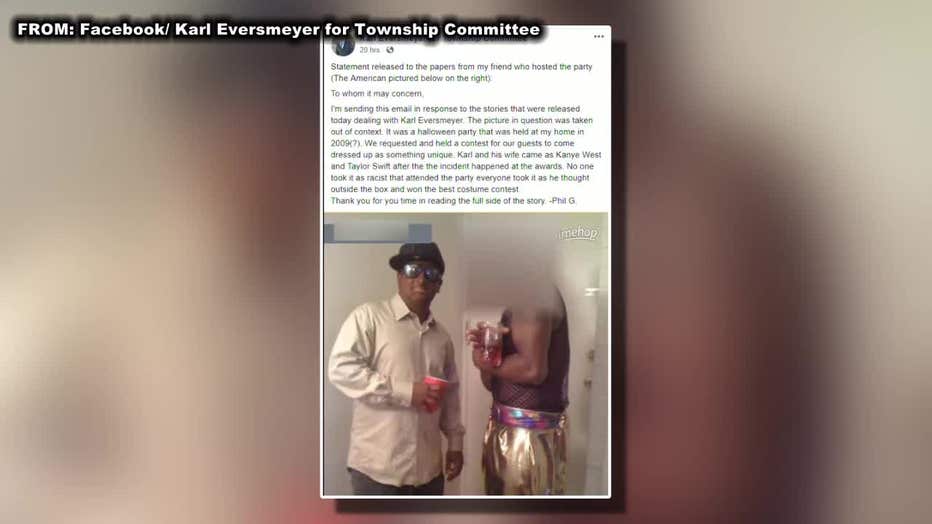 "There is no racist intent, obviously. If I'm racist, why would I closely align myself with someone of another color that's just been taken out of context," Eversmeyer told FOX 29. "I wouldn't dress up as anyone, any other color, today, no way. Ten years ago, I had no idea what blackface was."

His Democratic opponent, the current mayor, says the photos are offensive.

"I'm not saying that he is a racist or that he's not a racist, I'm just saying that there are residents that see this and that are offended by it," Mayor John Wisniewski said.  How are they gonna trust you if you kinda feel like you didn't do anything wrong?"

One of the township's Republican leaders says she stands by him.

"If you look at it up front, you would think yes. In today's time that is not something we do, and it's very offensive to people, but if you talk to him and find out the situation that his friends thought that was okay, I think it's different," Nancy Burkley said