Police in Shorewood, Wisconsin, said a 64-year-old woman was arrested for the second time in two days on June 7 for allegedly pushing a person protesting at her house over an incident the day before in which she allegedly spat at a black teenager.

MILWAUKEE - A 64-year-old woman and licensed attorney was arrested for the second time in two days after a video was published on Facebook which showed her spitting on a black teenager during an anti-racism protest in Milwaukee.

Video published by Caress Gonzalez Ramirez shows the woman — later identified by police as Stephanie Rapkin — surrounded by protesters who appear to be chanting at her. In the video, Rapkin then appears to spit in the face of one of the protesters.

WITI reported that confrontation happened just as the demonstration was ending. Just before the altercation, Gonzalez Ramirez said she saw the rapkin park her car, blocking protesters in the middle of the intersection.

"She just kept saying we're an inconvenience and that she had to go to the store," said Gonzalez Ramirez, who recorded the altercation. 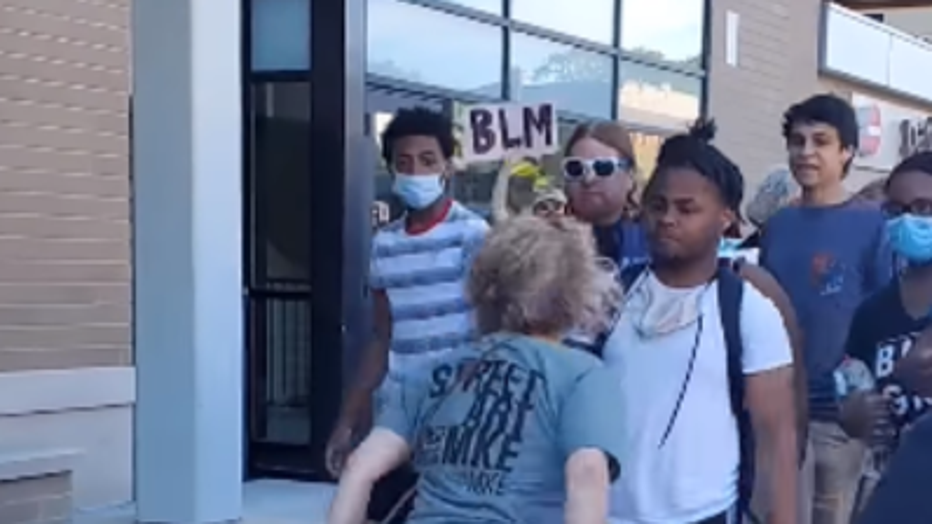 Video shows and elderly woman spitting on a juvenile protester during an anti-racism demonstration in Milwaukee. (Credit: Caress Gonzalez Ramirez)

Police said the woman had been arrested and booked over this incident, but that they were unable to transport her to Milwaukee County Jail due to the facility’s “current policies pertaining to the COVID-19 pandemic.”

The following day, protesters reportedly showed up outside Rapkin’s home where they decorated the sidewalk around her house with chalk. It was then that Rapkin allegedly became physical with another protester and was taken into custody for the second time.

RELATED: What 'defunding the police' means

The demonstrator she had spit on was a juvenile who later spoke out against the incident Monday morning, June 8 during a press conference held by the Shorewood School District in Miwaukee.

School officials Monday asked the Milwaukee County district attorney to include a hate-crime enhancer on any charges against Rapkin, according to WITI.