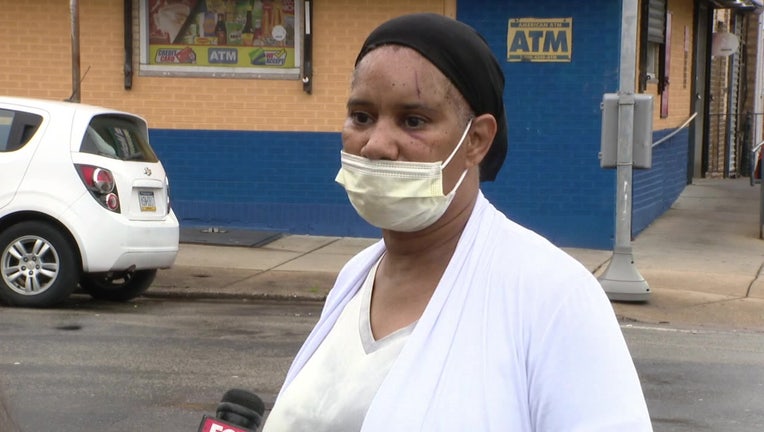 In an exclusive interview with FOX 29's Lauren Dugan, Tammy Morris denied police reports and said she saved herself and grandmother from a domestic dispute turned house fire when cops would not go inside.

EASTWICK - A Philadelphia woman who said she was pistol-whipped during a domestic dispute turned house fire claims she had to rescue herself and her grandmother when officers refused to go inside.

Police were called to the 2500 block of South 71st Street just before 3:30 a.m. Saturday after a woman reported she was being held at gunpoint by her boyfriend who threatened to burn down the house.

When police arrived they found the house engulfed in flames and a noticeable smell of gas. Officers said they rescued a 56-year-old woman from the home and returned inside to remove her 90-year-old grandmother.

Police: Eastwick man pistol-whipped girlfriend, barricaded self inside home before it went up in flames

Police say when they arrived they smelled flames and then the fire broke out.

When officers went inside, they were allegedly met by a man who pointed a handgun at them but did not fire. Officers and the elderly woman were able to escape the house unharmed, according to police.

The victim's boyfriend's body was later found on the second floor of the charred home, police said. The cause of death is still under investigation.

In an exclusive interview with FOX 29's Lauren Dugan, Tammy Morris refuted the Philadelphia Police Department's account of what happened on Saturday morning. Morris claims she saved herself from the home and went back inside to get her grandmother when officers refused.

"I'm so upset with Philadelphia police, and then to get on camera and lie and say that you helped, say that you rescued two women, you didn't rescue nobody," Morris said.

She claims that police encouraged her to climb out a window when she saw her boyfriend attempting to start a fire on the gas stove. Once Morris fled the house, she told cops that her grandmother was inside but they would not enter because her boyfriend was armed.

Morris returned to the house and pulled her grandmother towards the front door, but could not get her completely outside the house.

"When I got to the front door I just came out enough so I can breathe and so she could breathe, I had her head out but her body was still in the door, the cops would not come up there to help me," Morris said.

A neighbor vouched for Morris's account of the story and said two people eventually helped Morris lift her grandmother to safety.

"I appreciate [police] every time they come out and I still respect the cops, because it ain't all them, but whoever was in charge definitely didn't handle it right," Morris said.

A spokesperson from the Philadelphia Police Department on Sunday night said it is "regrettable that accurate information was not relayed to the media" and that preliminary information may change during the investigation.

"It is important to keep in mind that officers speaking to the press are working off of preliminary information gathered on the scene—many of these scenes are still active and not all facts pertaining to the case have been gathered," the statement read.

"The findings of investigations are subject to change as police gather additional information from other officers, complainants, witnesses and offenders."

Morris, who was just discharged from the hospital, is now left with nothing after the fire destroyed her home. She is living with her sister and hoping insurance can help recover what she lost.

Editor's Note: An earlier version of this story reported that gasoline was poured around the house prior to the fire. An eyewitness has since disputed that initial account.