Jupiter and Mercury conjunction will light up sky on March 5

Jupiter, the largest planet, and Mercury, the smallest planet, will meet and form a conjunction on Friday, March 5.

The first full moon of spring, known as the Worm Moon, will shine in the night sky this weekend.

March’s full moon will reach peak illumination at 2:50 p.m. ET on Sunday, March 28. But it will actually appear full for about three days, beginning Saturday morning through Monday night and into early Tuesday, NASA says.

Worm Moon is thought to refer to the earthworms that start to emerge when spring weather arrives. The Old Farmer’s Almanac lists quite a few other names for March’s full moon that also speak to the transition from winter to spring.

The almanac, a North American publication founded in 1792 when George Washington was president, gets its Moon names from a number of groups — including Native American, Colonial American and European sources. 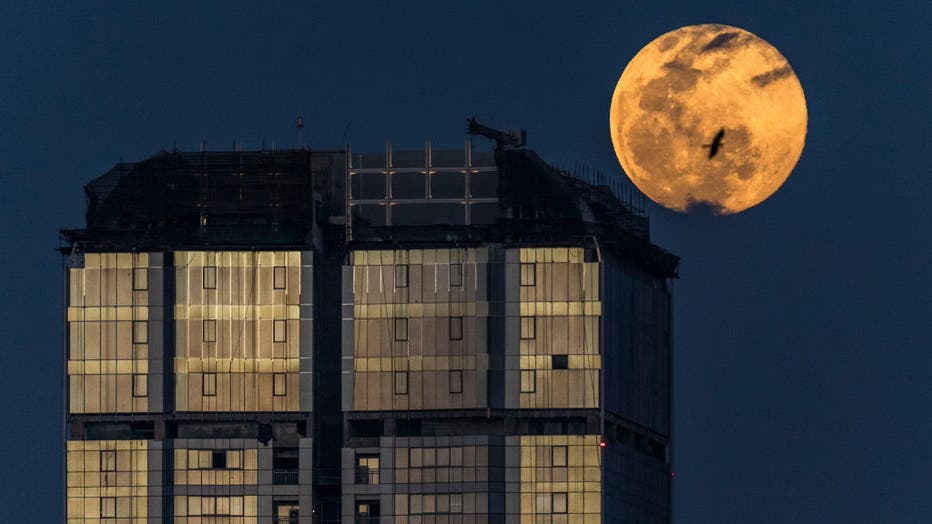 FILE - The Worm Moon rises in the sky over the high-rise tower on March 9, 2020 in Mumbai, India. (Photo by Pratik Chorge/Hindustan Times via Getty Images)

"Some (names) refer to the appearance (or reappearance) of certain animals, such as the Eagle Moon, Goose Moon (Algonquin, Cree), or Crow Comes Back Moon (Northern Ojibwe), the almanac says on its website.

Other names include the Sugar Moon (Ojibwe), marking the time of year when the sap of sugar maples starts to flow, or the Wind Strong Moon (Pueblo), which refers to the strong windy days that come at this time of year.

The Sore Eyes Moon (Dakota, Lakota, Assiniboine) highlights the "blinding rays of sunlight that reflect off the melting snow of late winter," the almanac adds.

Learn about February’s full moon known as the Snow Moon

Moongazers will get a chance to see the full moon known as the Snow Moon. It'll reach peak fullness on Saturday.

March’s full moon also plays a role in Christianity. It’s known as the Lenten Moon if it occurs before the spring equinox, or as the Paschal Full Moon if it is the first full moon of spring, according to the almanac.

This also has influence over the date of Easter, also called Pascha, which is generally celebrated on the first Sunday after the first full moon of spring. This year, Easter falls on April 4.

Earlier this month, sky-gazers had the rare opportunity to view another astronomical event when Jupiter, the largest planet, and Mercury, the smallest planet, were in conjunction — "essentially merging into a single bright ‘star,’" as described by the Farmer’s Almanac. This occurs when one planet's orbit around the sun aligns with another, which makes them appear as if they are orbiting in close proximity when viewed from Earth.

RELATED: UCF professor teams up with NASA to create camera going to the moon