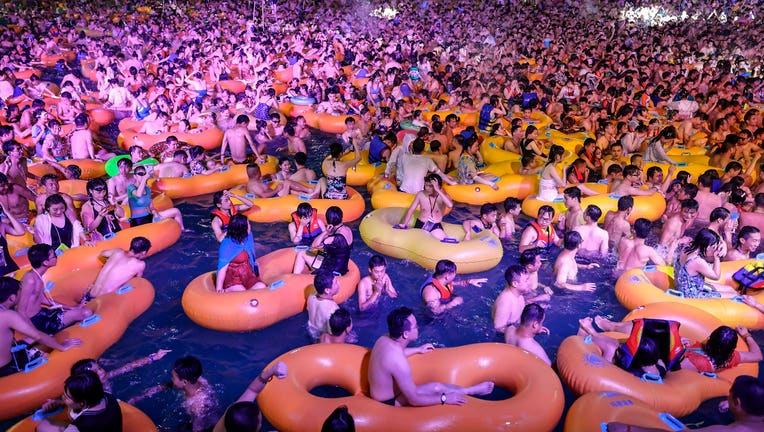 This photo taken on Aug. 15, 2020 shows people watching a performance as they cool off in a swimming pool in Wuhan in China's central Hubei province. (Photo by STR/AFP via Getty Images)

Thousands packed into a water park over the weekend in the Chinese city of Wuhan -- the first epicenter of the novel coronavirus that quickly swept the globe earlier this year.

Massive crowds of bathing suit-clad partygoers standing shoulder to shoulder – and without any face masks – were photographed in Wuhan Maya Beach Water Park on Saturday to attend an electronic music festival, according to Agence France-Presse. 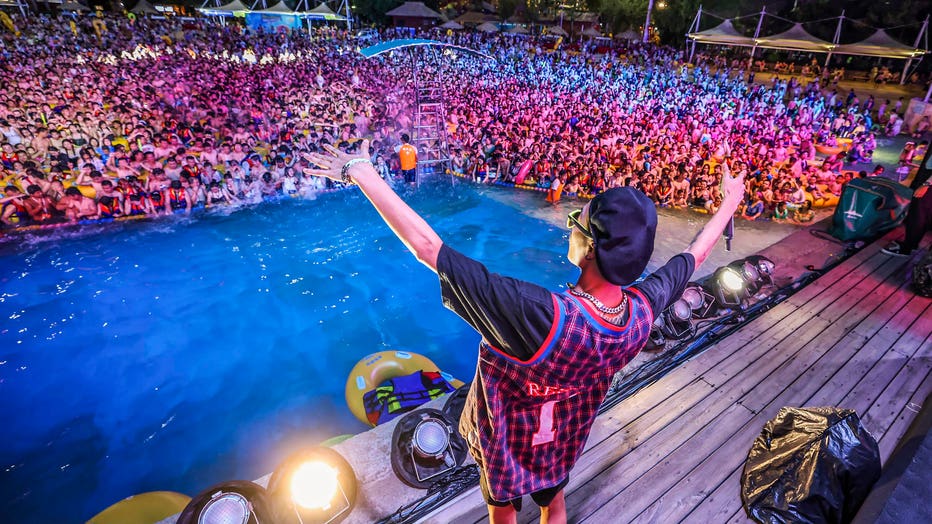 This photo taken on Aug. 15, 2020 shows people watching a performance as they cool off in a swimming pool in Wuhan in China's central Hubei province. (Photo by STR/AFP via Getty Images)

Images showed a pool packed with people and inner tubes, leaving little space between each other. No one seemed to be practicing social distancing, as close-knit crowds stood in waist-high water to listen to a DJ and watch a man in a water jet pack soar above the pool in a pyrotechnics show.

Saturday’s scene stood in stark contrast to how the city looked earlier this year -- when Wuhan’s some 11 million residents were effectively sealed off from the rest of the world when the coronavirus began to spiral out of control in January. Throughout a 76-day lockdown, all public transportation in the city was shut down, all flights, trains and buses were canceled and highway entrances were blocked. People could not leave their communities without permission – even to buy food from the grocery store.

In a show of good faith, Chinese President Xi Jinping visited Wuhan in March, and, by April, lockdown measures that extended throughout the Hubei province, of which Wuhan is the capital, were lifted. Around that time, the coronavirus had already devastated Italy and swept across Europe, as well as the United States.

According to the Chinese government, there have been no new domestically transmitted cases in the Hubei province since mid-May. Though Western powers have cast doubt over the accuracy of Chinese figures on the true impact of the virus.

Despite opening in June, the Wuhan Maya Beach Water Park had not drawn many visitors amid a period of flooding and heavy rain in the Hubei province. The park offered half-price tickets for female partygoers to attract guests and draw in needed income. Over 400 tourist sites across the Hubei province are offering free entry.