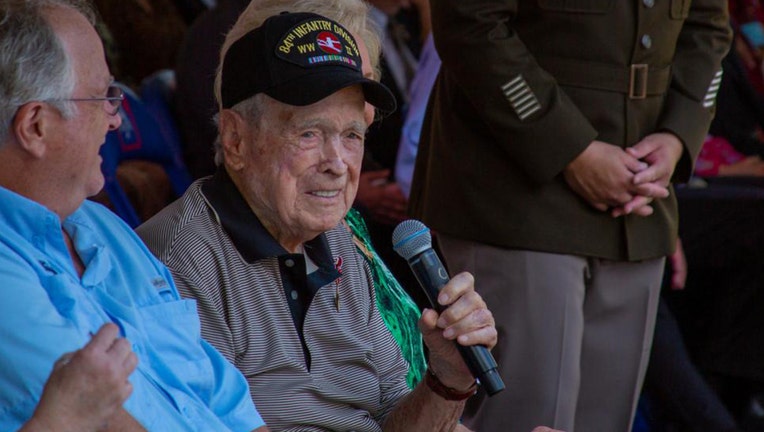 HOUSTON - The U.S Army North paid special tribute to the service of 97-year-old Reid F. Clanton, awarding him with belated medals at the Fort Sam Houston Quadrangle in Houston on Monday.

At the ceremony, the World War II veteran and U.S. Army Private First Class (PFC) was awarded the Bronze Star and other military service awards in recognition of his contributions to combat operations in the war.

"Clanton met all the requirements, but due to an administrative error, did not receive this and other awards earned during WWII until today," Spc. Andrea Kent wrote in a press release.

Clayton, who is a husband and father, was honored alongside his family members.

"Overall, Pfc. Reid Clanton spent more than 250 days in combat across France, Belgium, Germany, and more than 90 days of direct combat in France. The Army North motto is ‘Strength of the Nation’ and sir, you are a shining example of what makes this country so strong," said Gen. William Prendergast, who presided over the ceremony.

According to DVIDS, Clayton enlisted in the U.S. Army at 18 years old in 1943. He conducted training in Texas and Louisiana before his deployment in May 1944.

The Bronze Star is the fourth-highest military combat award for bravery and is awarded for heroic achievement, heroic service, meritorious achievement or meritorious service in a combat zone.

Ervin Fay celebrated his 100th birthday with 100 birthday cards that his wife of 75 years help get. (Credit: WLUK)

"Mr. Clanton returned via train to Fort Sam Houston where he was discharged without his awards and service records, something that was all too common for thousands of Soldiers at the time. He then hitchhiked back home to Corpus Christi following his return," said Jeff Wells, the founder of the San Antonio-based Veterans outreach group, Wish for Our Heroes.

"War is hell. We should try to prevent World War III. It's not the thing to do. We need to get along with each other, understand each other and help each other. We don't need any more war stuff," Clanton said.