The fast-casual chain operates 2,500 restaurants in the U.S., Canada and Europe.

Trump announced last week that he planned to impose a 5 percent tariff on all Mexican goods starting June 10 as a way to pressure the country to crack down on the surge of Central American migrants trying to cross the border.

Trump said the percentage will gradually increase "until the Illegal Immigration problem is remedied."

The tariffs could negatively impact Chipotle Mexican Grill. Chipotle Chief Financial Officer Jack Hartung said Monday the tariffs would reduce profit margins for the fast food company, which sells burritos and tacos and claims to use 450,000 avocados per day.

Hartung said in a statement this week to Fox Business that it could increase costs for the fast-casual chain by about $15 million this year.

“If the tariffs become permanent, we would look to offset these costs through other margin improvement efforts already underway,” Hartung said.

Hartung said a “modest” price increase on items, such as an extra 5 cents on a burrito, is one way to cover the cost “without impacting [the chain’s] strong value proposition,” Fox Business reports. 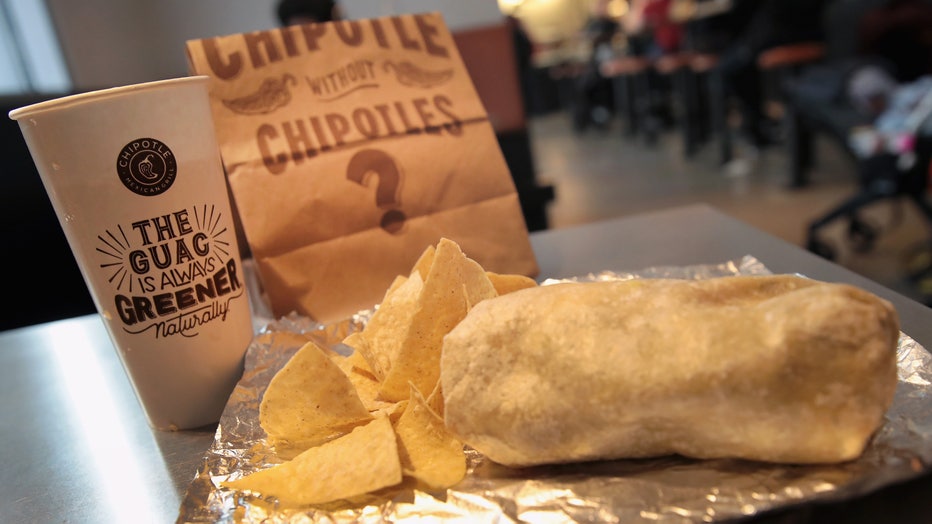 Food is served at a Chipotle restaurant on October 25, 2017 in Chicago, Illinois. (Photo Illustration by Scott Olson/Getty Images)

“We know that we could easily solve the volatility in our supply chain by purchasing pre-mashed or processed avocados which would be cheaper, readily available and provide stability, but we are committed to our brand purpose and upholding our food with integrity principles,” Hartung said in the statement, adding that the company plans to continue using whole, fresh ingredients.

Chipotle uses avocados and other produce grown in Mexico. The chain operates 2,500 restaurants in the U.S., Canada and Europe.

Mexico was concerned as well, and top officials were in Washington this week working to prevent the threatened trade taxes.

If Congress should vote against the tariffs it would be a stiff rebuke to Trump, much like its earlier effort to reject money to build a long, impregnable border wall. But many on Capitol Hill remain hopeful talks this week between U.S. and Mexican officials will ease Trump away from the tariffs he said he will start next Monday.

"We're going to see if we can do something," Trump said during a press conference in London on the second day of his state visit to Britain.

"But I think it's more likely that the tariffs go on," he said. He also doubted Republicans in Congress would muster the votes against him. "If they do, it's foolish."

Mexico seemed much more optimistic about a resolution.

"By what we have seen so far, we will be able to reach an agreement," Mexican Foreign Minister Marcelo Ebrard said during a news conference at Mexico's Embassy in Washington. "That is why I think the imposition of tariffs can be avoided."

Trump also raised tariffs on $200 billion in Chinese goods from an already existing 10 percent tariff put in place in September to 25 percent. As a result, the National Retail Federation said that almost every type of product from every sector of the American economy would be affected by the increase.

Costco Wholesale Corp. reportedly said its prices would increase due to the trade war between the U.S. and China as well as increased tariffs.

“At the end of the day, prices will go up on things. What’s interesting is that it’s hard to predict what the impact is,” Costco's Chief Financial Officer Richard Galanti said. “We want to be the last to raise them. And when prices are going down, we want to be the first to lower them. We’re not afraid to use some of those monies to again drive business.”

Costco is looking to accelerate shipments before certain tariffs are put into effect, according to Reuters. The company, which sells items wholesale for lower prices, also said it would source goods from other countries.