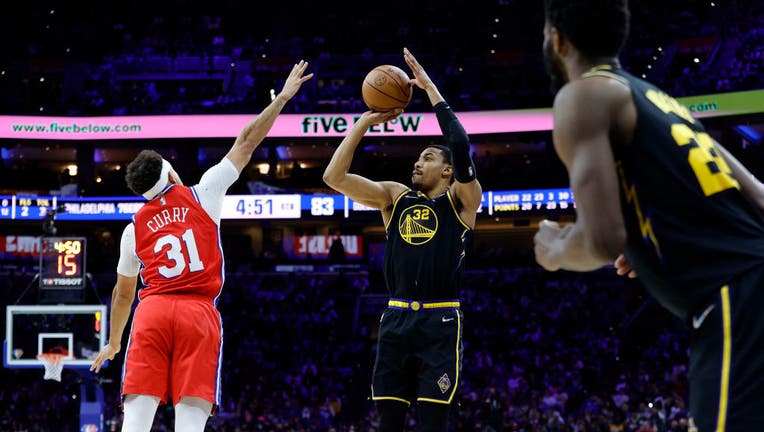 PHILADELPHIA - Stephen Curry had one 3-point shot swatted away out of nowhere by Matisse Thybulle and the Philadelphia defender got him again on a block that sent the ball flying.

That left Curry with the rarest of stat lines: 3-pointers, three; shots blocked, two. Stifled by Thybulle, Curry's chase for the NBA 3-point mark goes on.

"I try to keep it out of my head and just play basketball," Curry said.

Joel Embiid had 26 points and nine rebounds and the Philadelphia 76ers delayed Curry's bid to break Ray Allen’s career 3-point record in a 102-93 victory over the Golden State Warriors on Saturday night.

Golden State dropped to 21-5, falling a half-game behind Phoenix for the NBA lead.

Curry was largely shut down over 36 minutes by Thybulle, who made just his sixth start of the season, strictly to blanket the guard. Curry was 6 of 20 from the floor and the Warriors were held under 100 points for the second time this season.

"Just having guys willing to let me take on that 1-on-1 matchup and play the rest of the team 4 on 4 ... allowed me to stay close to the body and not let Steph get anything easy," Thybulle said.

Curry scored 18 points and shot 3 of 14 from 3-point range to move within six of matching Allen’s record. Curry’s next shot at the record is Monday night at Indiana in the second game of a five-game trip. He needed nine 3s against the Sixers to tie Allen’s mark of 2,973 regular-season 3s from 1996-2014.

Thybulle was the first player to block multiple 3-point attempts by Curry in a single game in his NBA career.

"I give Thybulle credit. He’s a rare combination of length and athleticism and brains," Warriors coach Steve Kerr said. "He did as good a job on Steph as anybody I’ve seen in a long time."

Sixers and Warriors fans both rooted for Curry to set the mark in Philadelphia. Fans held signs asking for the record — one read, "To 2,974 and Beyond" — and they mobbed him for autographs after warmups on his way back to the locker room. Curry obliged and signed jerseys and cards, as one fan yelled, "Break the record, tonight, baby!"

Not in Embiid's house.

Curry made only two 3s in the first half and one in the fourth quarter.

"I understand the opposition is not going to want that happen on their home floor," Curry said. "They defended accordingly."

"The record’s going to happen at some point soon. No reason to force anything," Kerr said.

Embiid heard "MVP! MVP!" chants and made all 11 free throws as he rallied the Sixers past the Warriors. The Sixers outscored the Warriors 32-20 in the fourth quarter. Tobias Harris scored 16 points.

The Warriors — just 12 of 48 from 3-point range — are ready for Curry to set the record and move on from the hype surrounding his pursuit of Allen's mark.

"I think it's hanging over the world. We all want to see it," Warriors star Draymond Green said.

Nobody has made more 3-pointers for one team, or in one season, or in one postseason. He already has passed Allen for the most 3s when including playoffs.

76ers: Curry played against his brother, 76ers guard Seth Curry. Seth Curry scored 10 points and had the basket that made it 93-83.

76ers: At Memphis on Monday night.

Warriors: At Indiana on Monday night and then at New York on Tuesday.

At 33 years old and playing with a heavy workload, Kerr may rest Curry against the Pacers.

"I always want to play, but it’s also understanding the big picture and re-assessing how your body feels after every game," Curry said. "I don’t want to give too much away, but you have things you’re doing regular maintenance on."