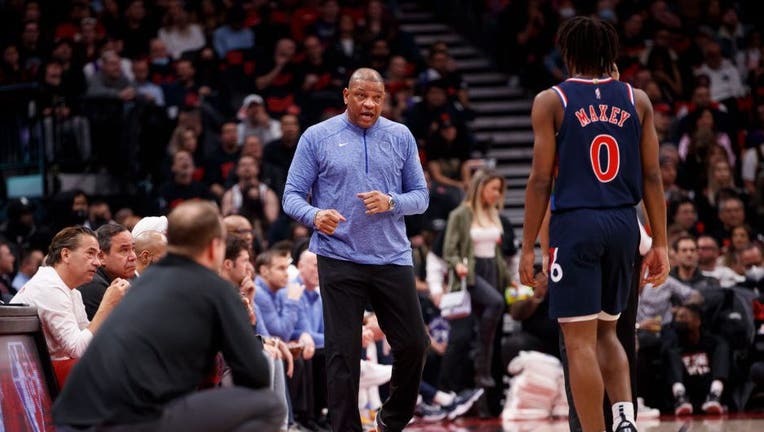 TORONTO, ON - APRIL 28: Head coach Doc Rivers of Philadelphia 76ers talks to Tyrese Maxey #0 during Game Six of the Eastern Conference First Round against the Toronto Raptors at Scotiabank Arena on April 28, 2022 in Toronto, Canada. NOTE TO USER: Use

A few hours before Game 6 of his team’s first-round series in Toronto got started on Thursday night, Philadelphia coach Doc Rivers was busy watching film.

It wasn’t tape of the Raptors.

He was watching the Miami Heat.

The next challenge is now known for the 76ers, and Rivers wasted no time before beginning the process of getting ready. For the fourth time in the last five years, the 76ers are headed to the Eastern Conference semifinals, where the top-seeded Heat await.

Game 1 is Monday in Miami.

"It’s going to be a short turnaround," Rivers said.

Yes, but a happy one. Joel Embiid — playing through a thumb injury that he’ll have until the offseason — scored 33 points, Tyrese Maxey added 25, James Harden chipped in with 22 and the 76ers rolled past the Raptors 132-97 on Thursday night to clinch the first-round series in six games.

The Heat have been off since finishing a five-game ouster of Atlanta on Tuesday.

Philadelphia’s players get Friday off; coaches won’t, but there’s no practice. The 76ers will hit the practice court Saturday and Sunday, then fly to Miami for Game 1. But the way Embiid sees it, the preparation for Miami — a team that switches on everything and thoroughly thwarted Atlanta in Round 1 with swarming defense — didn’t start when Rivers began watching film Thursday afternoon. Embiid figures it started in Game 1 against Toronto.

"Toronto actually prepared us extremely well for them, because they’ve got basically the same schemes," Embiid said.

There are ties that bind; Heat point guard Kyle Lowry is from Philadelphia, and leading scorer Jimmy Butler is a former member of the 76ers and close with Embiid from his time there.

The 76ers bucked a trend in finding a way to get past the Raptors. The last time Philadelphia had dropped back-to-back games in a playoff series and still prevailed was the 2001 East finals against Milwaukee, when it lost Games 2 and 3 to fall behind 2-1 before eventually winning in seven games.

They were 0-11 in that scenario since, and lost Games 4 and 5 of this series against the Raptors to see a 3-0 lead trimmed to 3-2. But they left no doubt Thursday night, using a 17-0 run in the third quarter to take total control.

It silenced doubters, at least. Rivers famously has lost three series in which past teams of his held 3-1 leads, and seeing 3-0 become 3-2 certainly rekindled some of those memories. Rivers said the only way to avoid the conversation would be to win Game 6, and his team listened.

"We live and we learn from it and we push on," Philadelphia’s Tobias Harris said. "And now we’ve got to get ready for Round 2."

The 76ers’ win means the first round in the East went according to plan. Each of the top four seeds advanced — No. 1 Miami and No. 4 Philadelphia meet in one semifinal, while No. 2 Boston and No. 3 Milwaukee meet in the other. The Celtics-Bucks series starts Sunday.

And before leaving Toronto for the final time this season, Rivers tipped his cap to the Raptors.

"This series made us a better basketball team," Rivers said. "We actually needed them in some ways. We are a new team and we’re still growing. All the switching and all the different things they did, I thought it was really good for our team. I thought it was something good to go through."