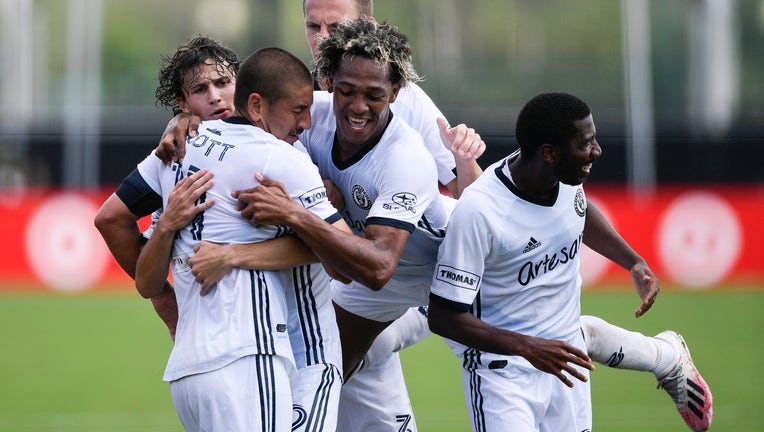 Alejandro Bedoya #11 of Philadelphia Union celebrates with his teammates after scoring a goal during the second half of the game against the New York City FC in the MLS is Back Tournament at ESPN Wide World of Sports Complex on July 09, 2020 in Reuni

LAKE BUENA VISTA, Fla. - Alejandro Bedoya scored in the 63rd minute and the Philadelphia Union defeated NYCFC 1-0 on Thursday in the MLS is Back tournament.

NYCFC goalkeeper Sean Johnson dove and got a hand on the ball but couldn't keep Bedoya's left-footed strike out of the net after a scoreless first half.

The teams met on the second day of the monthlong tournament played without fans in attendance at ESPN’s Wide World of Sports complex at Walt Disney World.

Goalkeeper Andre Blake preserved Philadelphia's first win of the season in the 86th minute when he dove to push away Brazilian forward Heber's shot from the left side of the box.

Teams are divided into six groups for the opening stage of the World Cup-style tournament, with results counting toward the regular season. FC Dallas was forced to withdraw after 10 players and a coach tested positive for COVID-19.

NYCFC finished atop the Eastern Conference last season. The team returned much of its roster, including midfielder Maxi Moralez, who led the league in assists last season with 20. Heber had 15 goals in 22 appearances with the team last season.

MLS returns to action after poignant moment of silence

NYCFC lost both of its games played before the season was shut down on March 12. The team has yet to score a goal this season.

The Union, which had a loss and a draw to start the season, finished third in the East last year. Forward Kacper Przybylko, who led the Union with 15 goals last season, started.

Players for the Union wore jerseys with the names of people killed by police. Ray Gaddis wore the name Taylor for Breonna Taylor, a Black emergency medical technician who died after being shot eight times by Louisville, Kentucky, officers serving a narcotics search warrant in her apartment. Goalkeeper Blake wore Floyd, for George Floyd, a handcuffed Black man who died after a white Minneapolis police officer pressed his knee against Floyd’s neck for nearly eight minutes.

The group stage features early morning games to avoid the heat and humidity in Florida. The game-time temperature was 82 degrees Fahrenheit (27.7 Celsius) with 88% humidity.