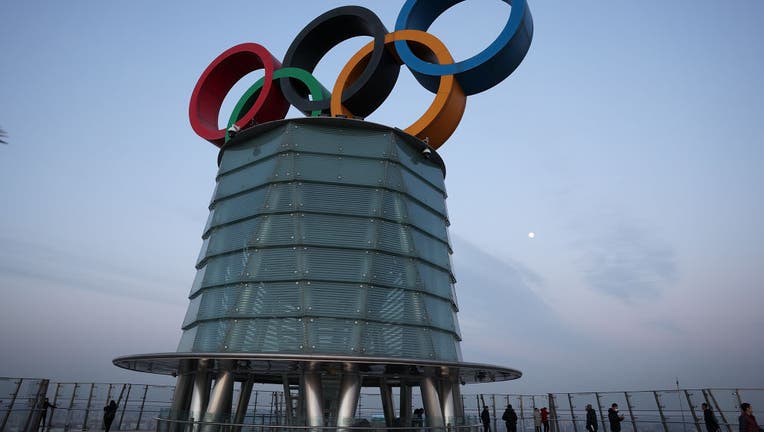 BEIJING, CHINA - JANUARY 16: Visitors pose for photographs with the Olympic rings at the Beijing Olympic Tower on January 16, 2022 in Beijing, China. The Beijing 2022 Winter Olympics are set to open February 4th. (Photo by Lintao Zhang/Getty Images)

Beijing Olympics organizers announced Monday that only "selected" spectators will be permitted at the Winter Games next month due to the coronavirus pandemic.

Beijing had already cracked down on allowing fans from outside the country to go to the Games, something Japan similarly did for the Summer Olympics. Tickets have not yet been offered to the general public.

The organizing committee said measures were intended to "create a pleasant environment for the holding of the Games."

"Given the difficult and complicated work of controlling the epidemic, and to protect the health and safety of those involved with the Games, the original plan of offering tickets to the general public has been altered toward spectators from selected groups," the committee said.

TeamUSA weightlifter speaks out on doping concerns within sport

Wes Kitts spoke with FOX Television Stations about weightlifting not being allowed in the Los Angeles 2028 Olympic Games.

The Olympics will be held in Beijing and the neighboring Hebei province starting Feb. 4. According to Reuters, it will take place in a "closed loop" to keep athletes and other personnel away from the general public.

China is trying to stick to a zero-tolerance approach when it comes to the coronavirus. The impact of the omicron variant has already made that difficult.

Athletes, team staff and media will need to be fully vaccinated to be allowed in the Olympic areas without completing a 21-day quarantine. Those areas will consist of the Olympic Village, game venues, other select spots and dedicated transport.

Those same people will have their temperatures taken and best tested with throat and nasal swabs once they arrive at the Beijing airport. They will then be transported to their designated lodging where they will wait up to six hours for test results to clear them before moving into approved areas.

If an athlete tests positive but is asymptomatic, they will be isolated in a dedicated hotel. They will not be allowed to leave their rooms. They can leave after two days of negative tests.

Those who test positive and have symptoms will have to go into isolation at a hospital. They’ll also need two days of negative tests to be let go as well as three days of normal temperatures and symptoms subsiding.

The Associated Press contributed to this report. Read more of this story on FOX News.