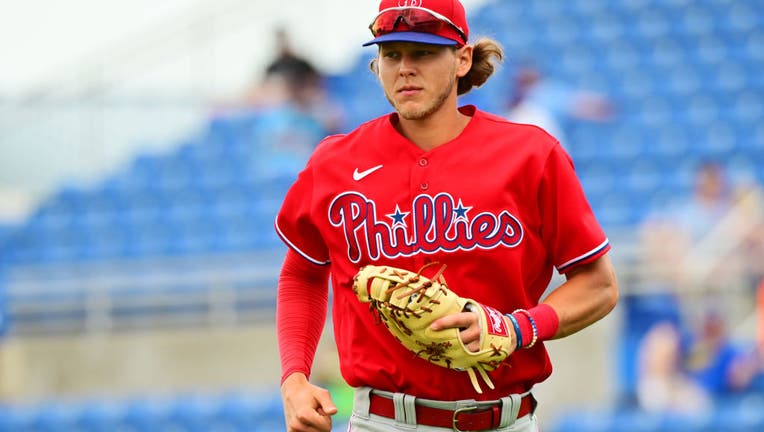 DUNEDIN, FLORIDA - APRIL 02: Alec Bohm #28 of the Philadelphia Phillies runs back to the dugout after the first inning against the Toronto Blue Jays during a Grapefruit League spring training game at TD Ballpark on April 02, 2022 in Dunedin, Florida.

PHILADELPHIA - Alec Bohm might find it easier in Philly to make up for errors in the field than one with his mouth.

The three E-5s were nothing compared to one F-bomb he dropped in frustration.

Lip-readers ran wild when cameras caught Bohm having some choice words after his second error.

"I (expletive) hate this place," he said.

Maybe a rally he ignited with a leadoff walk — and owning up to his mistake — soothed some hard feelings.

J.T. Realmuto hit a two-run homer in the eighth inning and Rhys Hoskins and Didi Gregorius followed with run-scoring doubles that helped the Philadelphia Phillies rally past the New York Mets 5-4 on Monday night.

The Phillies trailed 4-0 before they scored five runs in the eighth against two Mets relievers. Realmuto’s first homer of the season deep into the left-field seats made it 4-3. Hoskins ripped a tying double to left off Seth Lugo (0-1), and Gregorius lined one into the right-center gap for a 5-4 lead.

Bohm made three errors at third base in the first three innings, a bad look as he tries to win the third base job over rookie Bryson Stott. Edge after this defensive disaster: Stott.

Bohm said "emotions got the best of me" and did not mean any offense toward the franchise or Philadelphia.

"I said it. Do I mean it? No," Bohm said. "It's a frustrating night for me, obviously. Made a few mistakes in the field. Look, these people, these fans, they just want to win. You heard it, we come back, they're great. I'm just sorry to them. I don't mean that."

Bohm made his first error in the first when he charged a ball that shot off starter Ranger Suarez’s glove and made a wild, sidearm throw that sailed into right field. His second error was in the second, a routine grounder that he threw over first baseman Rhys Hoskins and into foul territory. Bohm completed the trifecta in the third on a wide throw that pulled Hoskins off the bag.

"I think it's a kid that was frustrated," Phillies manager Joe Girardi said. "I don't think that kid was referring to, you know, the city of Philadelphia, the fans. I think he was referring to the situation he was in. Put yourself in his shoes."

The Mets, though, did not score an unearned run off the three errors.

Girardi said before the game he started Bohm over Scott because of previous success against Mets starter Taijuan Walker.

"He’s had success off of Walker," Girardi said. "And as I said, they’re both going to play. I think it’s important they both play."

Walker, though, only lasted two innings because of right shoulder irritation. He struck out four, walked none and threw 30 pitches, retiring all six batters before he left the game. He’ll get an MRI on Tuesday.

Seranthony Dominguez (1-0) tossed 1 1/3 scoreless innings of relief for the win. Brad Hand worked the ninth for a save.

The NL East rivalry is just warming up: New York plays the Phillies 12 more times before the end of May. Then the season series resumes in August.

"I think we understand that our division is very tough and every game means something," Girardi said. "But you can’t make too much of three games in April. I mean, they’re really important to us but neither team probably looks the way it’s going to look in a sense in June and July because people aren’t built up."

Pete Alonso had an RBI groundout, Eduardo Escobar made it 2-0 on an RBI single to right and Mark Canha continued his torrid start with a run-scoring single off Suarez for a 3-0 lead in the first. Francisco Lindor added an RBI single in the seventh to make it 4-0.

"This one hurts," Mets manager Buck Showalter said. "The good thing is, we've got a chance to take that hurt away tomorrow. That's the beauty of the game. Sometimes it can be cruel, like tonight."

Alonso hit it high, hit it far ... he hit it where the umpires couldn’t tell in the twilight if his long drive was fair or foul. So it went to review. Foul.

Alonso then hit a grounder to Bohm and was ruled out on a wide swipe by Hoskins. Not quite. Upon further review, Hoskins missed the tag and Alonso reached on Bohm’s third error in three innings.

"You never overlook an orchid while searching for a rose." — Showalter, on looking for available arms out of the bullpen.