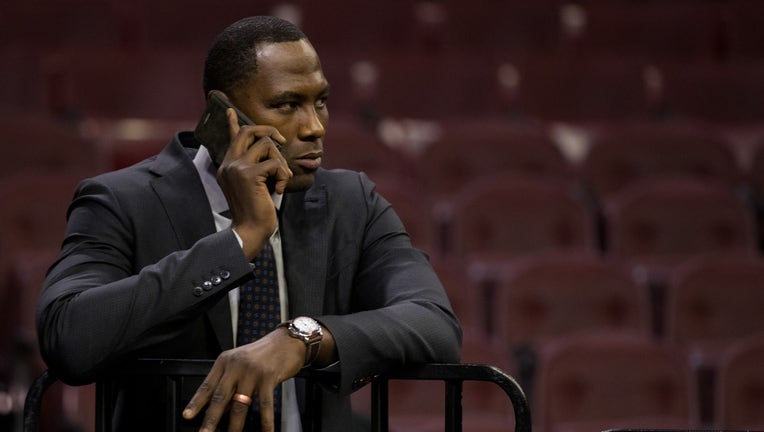 General Manager Elton Brand of the Philadelphia 76ers talks on the phone prior to the game against the Milwaukee Bucks at the Wells Fargo Center on April 4, 2019 in Philadelphia, Pennsylvania. The Bucks defeated the 76ers 128-122. NOTE TO USER: User

PHILADELPHIA - While his front office contemporaries enjoyed the spoils of splashy signings and bold trades, Elton Brand flew halfway across the world to serve as perhaps the most overqualified ball boy for the league's most enigmatic talent.

As Joel Embiid hoisted jumpers in his offseason workouts in Cameroon, his general manager gladly grabbed loose rebounds, the game plan of an equal parts hectic and intensely personal visit Brand hoped would deepen the bond between Embiid and the only franchise he's ever known. No member of the organization had ever made the pilgrimage to Africa's west coast to spend time in Embiid's homeland. Yet there Brand was, running a local hill with Embiid's cousin. Taking in home-cooked meals prepared by Embiid's mom, Christine. Getting a tour of the city of 2.8 million.

It wasn't something Brand needed to do. Embiid is locked up in Philadelphia indefinitely. Yet the trip was significant to Brand, who called it "touching."

The man tasked with helping the 76ers finish The Process they started earlier this decade believes a personal touch can help Philadelphia take the final steps from joke to juggernaut.

When the Sixers open the season against Boston on Wednesday night, Brand will sit in his usual seat on press row, with a clear view of Embiid, Ben Simmons and perhaps the best Sixers team to hit the court since the last one to win it all in 1983. The NBA championship Brand failed to win with the Sixers as a ballyhooed player is now within his grasp as the architect of a popular pick to win the East.

"I just think he's a star," coach Brett Brown said. "And I'm just thrilled I'm doing this with him."

The media room inside the 76ers' New Jersey headquarters is showcased with oversized magazine covers that include Moses Malone and Julius Erving leading the team to some of its greatest heights. The cover noticeably absent is an October 2008 issue of Sports Illustrated of a 29-year-old Brand that reads, "How Far Can Elton Brand Take The Sixers?"

Before televised decisions and superstar duos ruled the market, Brand was the marquee star of the free-agent class, the No. 1 pick in the 1999 draft out of Duke who rolled into Philly with career numbers of 20.3 points and 10.2 rebounds.

He signed an $82 million, five-year deal - dubbed then the "Philly Max" - that made the power forward the expected centerpiece that would transform the forlorn Sixers into Eastern Conference contenders.

Brand's image was plastered around town on everything from billboards to buses, and he was defined as the Sixers' savior. Brand instead was a bust from his first season (he played in just 29 games) in Philly and was riddled with injuries to the point where the Sixers used an amnesty buyout on him in 2012 for salary cap relief. He played for four coaches over that span and the Sixers never threatened for a championship.

The idea of what could have been as a player - a celebratory parade down Broad Street - motivates him to finish the championship push from the front office.

"We had an OK time, but it wasn't the best," Brand said. "Everybody else, I feel, got their money's worth. Clippers, Bulls, Dallas, Atlanta. I want to win a championship for these fans, this city."

About 14 months ago, Brand was again a prized prospect, only this time in the front office as the general manager in Delaware with the 76ers' G League affiliate. He ran a draft, made tons of trades, and handled meaningful and menial operations from parking passes to pumping ticket sales. Brand cut his teeth driving in snowy Midwest roads to scout developmental games in Oshkosh, Wisconsin and other remote towns far removed from the luxe life of the NBA.

Former Sixers GM Bryan Colangelo was impressed with the persistence, and put Brand on a career path toward Philadelphia.

"Bryan spoke of a succession plan with me," Brand said. "He gave me unparalleled access. I'm in some calls with some big-name players. I'm in the room. The draft, everything. The access he gave me, I'm very appreciative of it. I got to see how the business ran on the highest of levels."

Brand's rise from G League to making deals for Tobias Harris and Jimmy Butler in about a year didn't come through a slow rise up the corporate ladder, but rather, because of thoughtless 140-character bursts on Twitter in one of the more ludicrous stories in NBA history. Colangelo resigned in June 2018 as the 76ers president of basketball operations after what an investigation concluded was "careless and in some instances reckless" sharing of sensitive team information on Twitter. The Sixers were stunned when an independent review found that Colangelo's wife, Barbara Bottini, operated four Twitter accounts and admitted using private information to criticize the Sixers and rival colleagues.

Brown steadied the course over the summer as interim GM but wanted to yield the title to someone more equipped to handle the grind of the job. Houston's Daryl Morey was a top candidate - imagine yet another Twitter scandal rocking the organization- forcing Brand to prove to the Josh Harris/David Blitzer ownership group the new kid on the executive block could grow the Sixers from contender to champions.

Brand said he turned down an assistant GM position offered by the Atlanta Hawks after the 2015 season because he wasn't ready to put in 14-plus hour work days. But in Philly, Brand was up for the challenge, even as he suggested to Harris he should hire a proven GM if the right one was available.

"I had to convince myself, even, that I could do this job," Brand said.

Brand was hired last September, a move that not only made him GM at 39, but it kept the core of the front office that included Alex Rucker, Ned Cohen and Marc Eversley together without fear of a new boss cleaning house.

"I felt like this group should be safe because Bryan put together a pretty good staff," Brand said. "We did a lot of the work with Brett. If someone else comes in, it's off with their heads. We're all out of here. So if I can lead, if I can step up, I need to do that."

Brand returned in 2015 for a final 19-game stint with the Sixers under Brown that served as an audition of sorts for a future role in the organization. Brand took a beating as a pseudo crash-test dummy for Embiid, as the injured center that missed his first two seasons sharpened his way into shape and his NBA debut. Brand has joked he retired because he was getting destroyed by Embiid in practice, though the bruising-and-banging would help form a deep trust between the big men.

Embiid has a connection with Brand that he never forged with Colangelo, even saying before training camp, "With the past GM it wasn't all that."

"It's been easier, for sure," Embiid said. "We can talk as human beings. I know I can trust him. I know he's going to be real. He understands me and I understand him. The difference between a couple of years ago and the people who run the organization is definitely different."

So is Brand's role, from veteran mentor to boss.

"I've seen guys fix their hat or pull up their pants. I'm like, it's me, man. It's just me," Brand said, laughing.

Brand once envisioned himself as a Hollywood mogul and had his own production company before cutting ties to devote his professional time only to the 76ers. His companies produced movies that starred Brittany Murphy and Christian Bale, but Brand was stung when a 2012 horror flick near the end of his Hollywood run flopped.

Brand needs a blockbuster hit on his resume, one that rewards him with the Larry O'Brien instead of an Oscar and can finally answer the headline that more than a magazine around Philly has raised: How far can Elton Brand take the Sixers?

On Wednesday night, the next chance to figure it out begins.