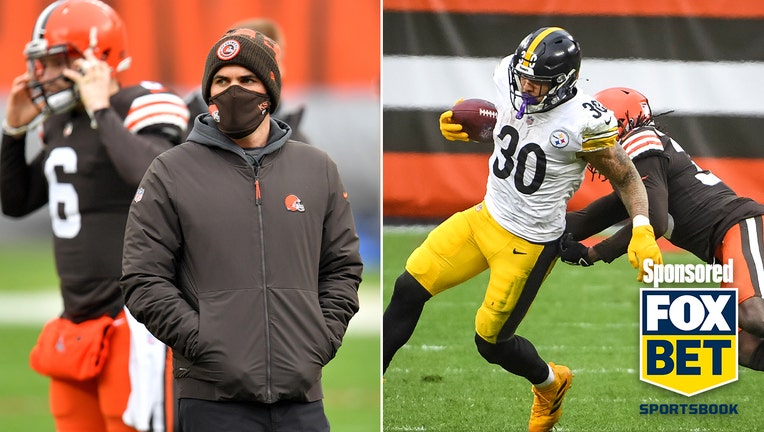 LEFT: Head coach Kevin Stefanski of the Cleveland Browns looks on before the game against the Pittsburgh Steelers at FirstEnergy Stadium on January 03, 2021 in Cleveland, Ohio. (Photo by Jason Miller/Getty Images) RIGHT: Ronnie Harrison #33 of the Cl

This should be a great week for the long-suffering fans of the Cleveland Browns. For the first time since the 2002 season and only the second time since the modern franchise was brought back, the Browns have qualified for the AFC Playoffs with an 11-5 record. And they are getting a chance to face your archenemy – the Pittsburgh Steelers- should be the cherry on top.

And yet, there’s an unease about the Browns thanks in large part of the COVID-19 pandemic. Cleveland head coach Kevin Stefanski was diagnosed on Tuesday with the virus, forcing him to miss this week’s playoff game. The Browns will also be without Pro Bowl guard Joel Bitino, who tested positive this week.

Still, Cleveland will try to make history and dispatch its awful 17-year losing streak in Pittsburgh on Sunday night (8:15 p.m., NBC) when they play the AFC North champions led by quarterback Ben Roethlisberger and a fierce Steelers defense.

Pittsburgh finished the regular season at 10-6 against the spread while Cleveland is 6-10.

The two teams split the season matchup, with Cleveland earning a 24-22 win over the Steelers last week to secure a playoff berth in a game where Steelers coach Mike Tomlin decided to rest his starters. In the first meeting between the two teams, Pittsburgh sacked Baker Mayfield four times and forced two interceptions during a 38-7 victory back on Oct. 18.

The Steelers have won 17 straights against the Browns at Heinz Field dating back to 2003 – only one of two wins by Cleveland since expansion in 1999. The two teams have played twice in the playoffs in the past- both of them won by Pittsburgh.

Pittsburgh’s season can be broken into two parts- the first 11 weeks where they went 11-0 and the final five where they went 1-4. Pittsburgh’s offense was lifeless in a three-game losing streak before beating Indianapolis to seal the AFC North. Roethlisberger struggled in games against the Bills and Bengals, but looked good against the Colts in the come from behind win. One thing that is striking though is the lack of a running game. Pittsburgh had one game of 100 or more total rushing yards in the final 11 games of the season. Still, the Steelers defense has been able to keep the lid on things and keep games close.

The Browns will lean on its running game to control the clock and ground down the Pittsburgh defense. Nick Chubb broke 1,000 yards rushing and scored 12 touchdowns while Kareem Hunt has rushed for 841 yards. That will be the best weapon that the Browns have since Mayfield can be shaky in big moments. There has been improvement in Mayfield, who has 26 touchdowns and eight interceptions to go along 3,563 yards. Jarvis Landry caught 101 passes, so expect Mayfield to look for him.