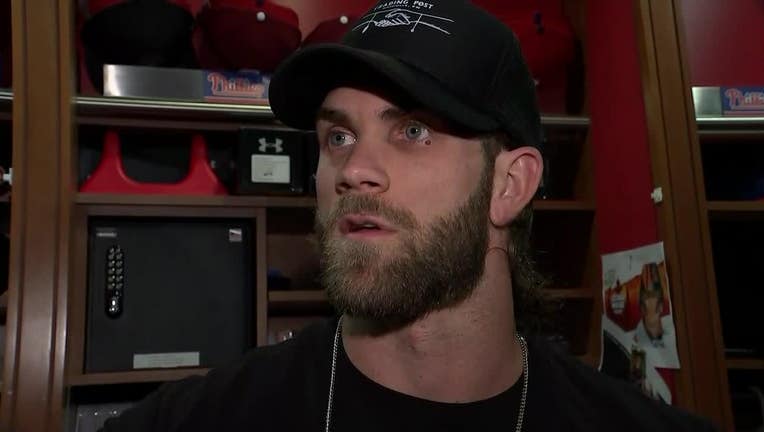 The former Nationals star didn't get specific or repeat what the hecklers were saying, but he wasn't happy following a 5-2 loss Wednesday night, the team's fifth straight setback.

"They were fine all game, talking about myself and things like that," Harper said. "I get it everywhere I go. That's nothing new. But the last two innings, it's just not right. It's not right."

He said he was eager to get back to Philadelphia and the great fans there.

"I've got 60,000 fans up in Philly that appreciate me as a player, appreciate me as an individual and my family, as well," Harper said. "I owe a lot to those people up there in Philly because they show up for me every single night and they're there to cheer us on and boo us and keep us going as a team and as individuals as well.

Thursday morning, Harper’s wife Kayla took to twitter and claimed the Nationals fans brought their infant son Krew up during their heckling.

“When you bring his son or family into it, yes you’re crossing a line. Stick to your overused overrated and Harper sucks chants if you’re really that loser that goes to a game to heckle someone. Phillies fans might boo him but they don’t bring his 4 week old son into it. Classless,” Kayla Harper tweeted.

Harper left the Nationals in free agency this past offseason to sign a 13-year, $330 million contract with the Phillies. The Nats got their revenge earlier this week when they officially eliminated Harper and the Phillies from playoff contention.

In the teams' first matchup in April, the boos by Nationals fans started when Harper's name was announced in the lineup, and derisive shouting followed during a video montage of his biggest moments with the Nationals. Harper was then booed at every at-bat, and when he took his position in right field, several fans were wearing white shirts that spelled out T-R-A-I-T-O-R.

He got a bit of retribution with a 458-foot homer that he punctuated with a bat flip.

Harper acknowledged he heard the boos in April, saying: "For me, that's part of sports, part of the game."