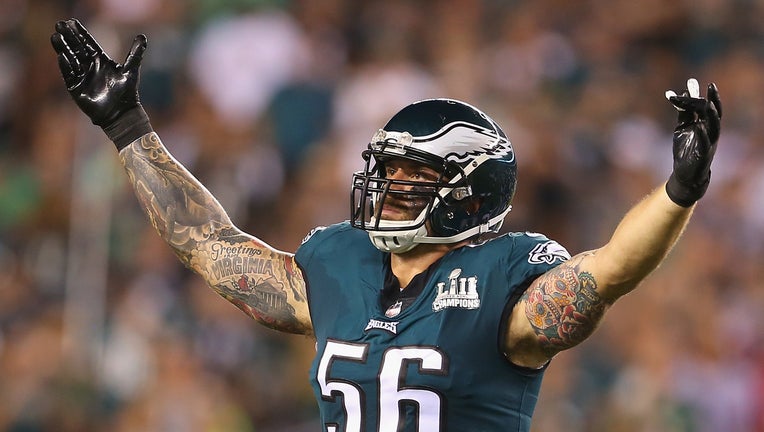 LOS ANGELES - Retired NFL player Chris Long and the National Hockey League have been honored at the Sports Humanitarian Awards.

The awards presented by ESPN on Tuesday night in downtown Los Angeles recognize those who use the power of sports to make a positive impact on society.

Long was honored with the Muhammad Ali Sports Humanitarian Award for his commitment to giving back through strategic, multifaceted efforts which attack larger systematic issues.

He donated his entire salary in 2017 to benefit educational equality and encouraged his fans to join him in the effort, which raised $1.75 million to support St. Louis, Boston and Philadelphia - cities he played in during his career. His Waterboys program has helped more than 225,000 people in East Africa gain access to clean drinking water by building more than 61 water wells to date.

The NHL received the League Humanitarian Leadership Award for its efforts to create the most inclusive experience for the entire hockey community. The league helped develop an on-ice Learn to Play initiative that has introduced more than 50,000 children to the sport at low to no-costs since 2015 and a STEM-based, hockey-themed digital learning platform involving science and math.

The other honorees were:

ESPN granted more than $1 million to the honorees' selected charities at the fifth annual show.

Highlights of the show will air July 18 on ESPN.