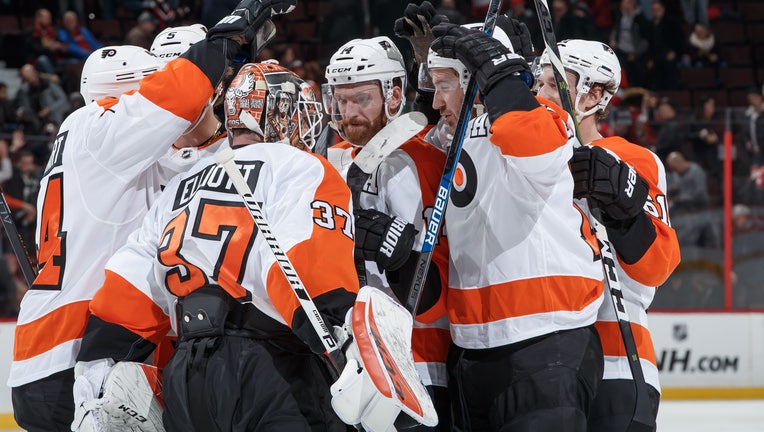 Tyler Ennis scored twice and Mark Borowiecki and Anthony Duclair added goals for the Senators (15-18-4). Marcus Hogberg stopped 34 shots in his third straight start. Anders Nilsson missed his second game with a concussion and Craig Anderson was not ready to return from a knee injury, but he did serve as the backup.

Tied 3-3 to start the third, the Flyers went ahead when van Riemsdyk scored his second of the game, beating Hogberg through the legs.

Midway through the period, Ennis scored his second of the game, on a rebound of a shot by Duclair, tying the score at 4-all.

The Flyers had a great opportunity to seal the win late in the period after the Senators took their second bench minor for too many men. But Philly failed to capitalize.

Philadelphia had seized to an early 2-0 lead in the second when van Riemsdyk's cross ice pass deflected off Cody Goloubef's skate and found the net.

The Senators then scored twice in a span of 24 seconds to tie the game.

Ennis scored Ottawa's first goal, picking up a loose puck by the crease and pushing it in. Borowiecki tied it with a shot from the point for his fourth of the season, a new career high.

At 18:21 of the second period, Ottawa took its first lead of the game when Duclair scored a power-play goal. He has 11 goals and four assists in his last 11 games.

The lead was shortlived as the Flyers tied the game less than a minute later when Voracek beat a sprawled Hogberg.

Philadelphia grabbed a 1-0 lead in the first period as Hayes scored past Hogberg's right pad.

NOTES: The Senators were without three of their veteran defensemen as Ron Hainsey, Dylan DeMelo and Nikita Zaitsev are all injured. ... Philadelphia forward Joel Farabee served the last of his three-game suspension for his hit on Winnipeg's Mathieu Perreault.