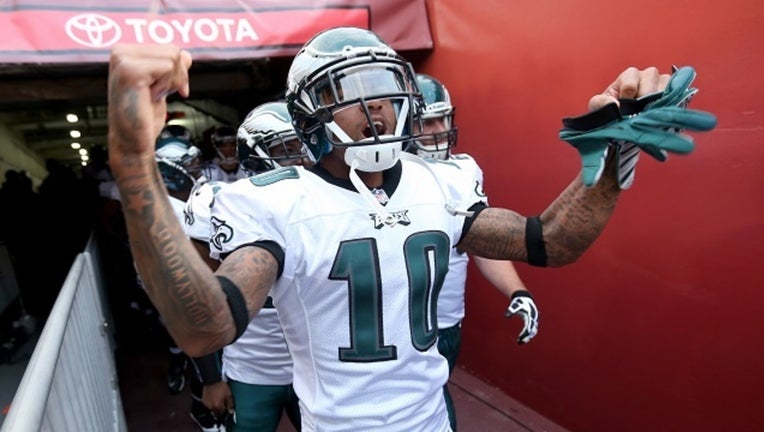 PHILADELPHIA - DeSean Jackson has been waiting months for this.

The three-time Pro Bowl wide receiver will play his first game since returning to the Philadelphia Eagles in March against the Washington Redskins on Sunday.

"It's going to be a very special occasion," Jackson said. "I've been looking forward to this since I've been back. All I can think about is the first time when I'm entering the field into the Linc."

Jackson never wanted to leave Philly but former Eagles coach Chip Kelly released him following his best season in 2013. He spent three years with Washington and two with Tampa Bay before Philadelphia traded for him in March.

Jackson has scored the most 60-plus-yard touchdowns (24) in NFL history and his 29 TDs of 50-plus yards are second behind Jerry Rice (36).

"He brings an element that we've missed at least since I've been here in the last three years, which is the speed factor," Eagles coach Doug Pederson said. "I think he still has great burst and quickness."

Jackson will play with a broken ring finger on his left hand and joked he might only be a "decoy" against Washington. His opponent knows better.

"Whoever is out there, we've got to eliminate (big plays) but we know where DeSean is, he's fast, and he's very talented," Redskins coach Jay Gruden said.

Here are some key angles to watch on Sunday:

"I have no expectations whatsoever anymore," Gruden said about Williams. "I'm kind of numb to the fact, so we're just going to coach the guys that we have. That's all we can do right now."

Reed is suffering from what's believed to be his fifth documented concussion in seven NFL seasons.

"It's tough because he's a great player, and I know what he wants to accomplish," Davis said. "When you have injuries, it kind of sets you back from being able to do what you're known for. I just hope that he can get back in here, hope he recovers well and he's here to help this team win because he's definitely a difference-maker when he's out there on that field and everyone knows it."

Eagles quarterback Carson Wentz plays his first game since a back injury sidelined him in Week 14 and forced him to watch from the sideline as Nick Foles led the team to the playoffs again. Foles was the 2018 Super Bowl MVP after Wentz tore two knee ligaments in Week 14. Foles is starting for Jacksonville now and Josh McCown is Wentz's backup.

Case Keenum makes his first start for the Redskins after spending a season with Denver. He last played in Philly when the Eagles trounced the Minnesota Vikings in the NFC title game two years ago.

"It took a while," Keenum said about getting over that loss. "It was tough. It's been a long time since then. It's a new team, it's a new year and that's what is so great about the NFL."

Running back Wendell Smallwood won a Super Bowl ring during three seasons with the Eagles and was Philadelphia's No. 2 rusher last season before he was claimed off waivers by the Redskins last week. Defensive end Treyvon Hestor also signed with the Redskins after the Eagles released him during the final cuts. Hester tipped a potential game-winning 43-yard field goal by Cody Parkey to help the Eagles beat the Bears 16-15 in a wild-card game in January.

"It's going to be a fistfight with those boys Sunday," Smallwood said. "I kind of let the guys know we're going to have to be physical. I know they like to let the D-line get after it."