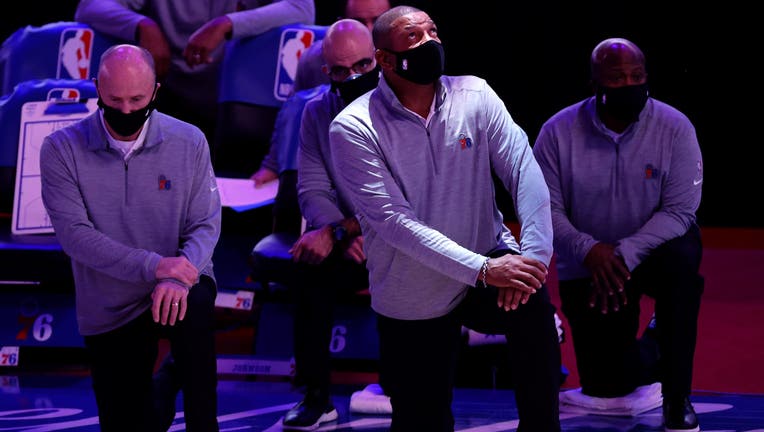 Head coach Doc Rivers of the Philadelphia 76ers looks on during a playing of the national anthem prior to a game against the Boston Celtics at Wells Fargo Center on December 15, 2020 in Philadelphia, Pennsylvania. (Photo by Tim Nwachukwu/Getty Images

Rivers used his voice to condemn the riots in Washington much in the same way he denounced racial injustice in the NBA bubble earlier in the year as teams grappled with how to deal with issues far more important than basketball.

He was invited to speak at a Joe Biden rally after the President-elect used Rivers’ words in an October speech, calling for racial unity at Gettysburg, Pennsylvania.

Rivers again decried the riotous mob Wednesday in Washington, though he cautioned, "democracy will prevail."

"I’ll say it because I don’t think a lot of people want to: Could you imagine today if those were all Black people storming the Capitol and what would have happened," Rivers asked. "That to me is a picture worth a thousand words for all of us to see. It’s something for us to reckon with, again, no police dogs turned on people, no billy clubs hitting people. People peacefully being escorted out of the Capitol. It shows you can disperse a crowd peacefully, I guess."

Rivers added: "As an older black male, I’ve seen police dogs being unleashed on people, and then you see today where there’s nothing, and so that’s an emotion that I have, right?"

Police have reported at least 50 arrests, 14 injuries to law enforcement officers, and a total of four deaths. One woman died from her injuries after authorities say she was shot by a Capitol police officer inside of the building during the surge. Three other deaths occurred following medical emergencies during today's protests.

Rivers was not alone, as organizations around the NBA reacted to the riot, as well as a decision by a Wisconsin prosecutor not to charge a police officer who shot a Black man last year.

In Miami, the Heat and Boston Celtics released a joint statement saying they were playing "with a heavy heart" in a game where most players and coaches knelt for the national anthem. In Milwaukee, the Bucks and Detroit Pistons both took turnovers on their first possessions — intentionally, with all 10 players on the court kneeling. In Phoenix, the Suns and Toronto Raptors stood in a circle and linked arms for the American and Canadian anthems. Many other tributes took place around the NBA.

The joint Heat-Celtics statement said, in part: "2021 is a new year, but some things have not changed. We play tonight’s game with a heavy heart after yesterday’s decision in Kenosha, and knowing that protesters in our nation’s capital are treated differently by political leaders depending on what side of certain issues they are on."

The Celtics discussed the Blake decision earlier in the day, before the events from the Capitol unfolded. The Celtics then met again as a team after arriving at the arena in Miami, discussed options, and coach Brad Stevens even called his wife to say that he didn't think his team would take the floor.

"They’ve operated in a win-at-all-costs attitude," Stevens said of Trump’s administration. "I don’t know, our sports world is a lot less important, obviously. But I’ve always thought if you operated with a win-at-all-costs attitude, it’s going to be a pretty unfulfilling ending. And in this situation, a disgraceful ending. So, I’m looking forward to two weeks from now, as I know a lot of other people are, too."

Biden will be inaugurated two weeks from Wednesday, on Jan. 20.

FBI seeking information after chaos and destruction at US Capitol

Over 50 people arrested, 14 officers injured and 4 deaths reported amid pro-Trump protests in DC