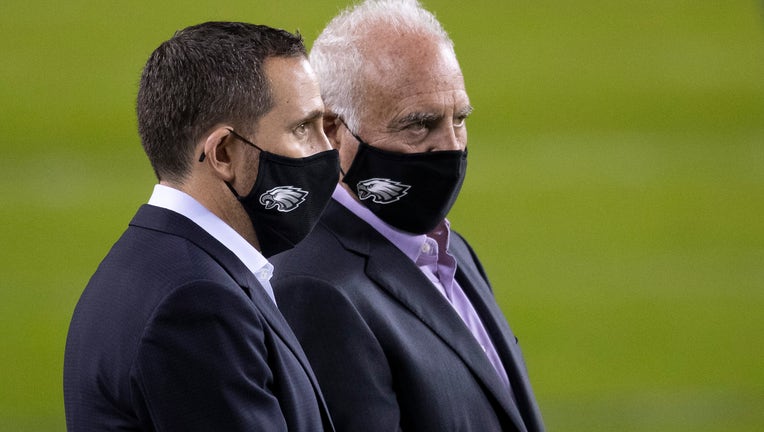 General manager Howie Roseman of the Philadelphia Eagles talks to owner Jeffrey Lurie prior to the game against the Seattle Seahawks at Lincoln Financial Field on November 30, 2020 in Philadelphia, Pennsylvania. (Photo by Mitchell Leff/Getty Images)

PHILADELPHIA - The Philadelphia Eagles have moved back in the first round of the NFL draft after a trade with the Miami Dolphins, and managed to get their hands on another first-round pick in next year's draft.

The team announced on Friday that they had dealt the 6th overall pick in the draft and the 156th pick to the Miami Dolphins in exchange for the 12th overall pick, the 123rd pick, and a first-round pick in the 2022 NFL Draft.

The Dolphins acquired the 12th pick in an earlier trade where they send their 3rd overall pick to the San Francisco 49ers.

The move likely means the Eagles are out of the first-round quarterback sweepstakes after rumors of taking another signal-caller in the number six spot swirled following the Carson Wentz trade.

NFL Network's Ian Rapoport reported said the Eagles expressed interest in trying to move up in the draft to choose Brigham Young University quarterback Zach Wilson. Philadelphia ultimately decided to continue to build towards the future by collecting another future first round pick, Rapoport said.

Barring a trade back up, it may also take the Eagles out of the running for a number of high-profile offensive weapons like Philadelphia native Kyle Pitts, or wide receiver Ja'Marr Chase.

Fans are hoping the team and Executive Vice President of Football Operations Howie Roseman can strike gold regardless of where they end up drafting, with a number of glaring needs remaining on both sides of the ball.

The Eagles have not drafted a Pro Bowler since they traded up to get draft Carson Wentz in the 2016 NFL draft.