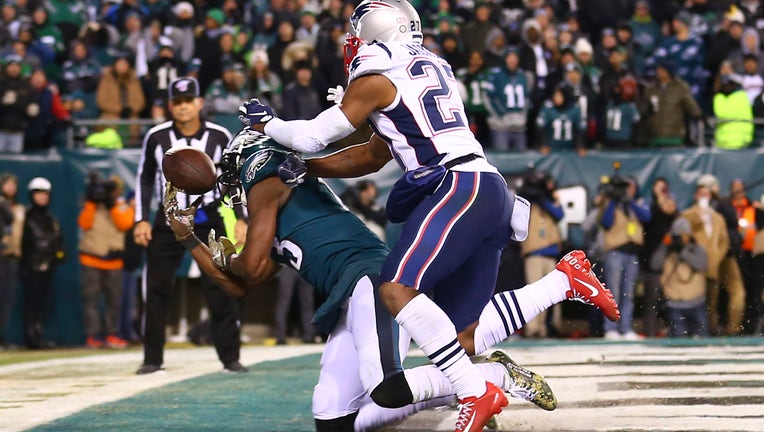 PHILADELPHIA, PA - NOVEMBER 17: Nelson Agholor #13 of the Philadelphia Eagles cannot make the catch against J.C. Jackson #27 of the New England Patriots in the fourth quarter at Lincoln Financial Field on November 17, 2019 in Philadelphia, Pennsylvan

PHILADELPHIA - Facing the NFL’s stingiest defense without their two best wide receivers and top running back, the Philadelphia Eagles still had a chance.

They couldn’t make a big play.

Carson Wentz misfired on three straight passes from the Patriots 26 and then Nelson Agholor couldn’t make a twisting catch in the end zone on a fourth-down pass with under a minute left.

That sums up Philadelphia’s offense this season.

A 17-10 loss to New England on Sunday left the Eagles (5-5) searching for answers to fix their inconsistent, out-of-sync offense.

“It affects you in a few ways,” coach Doug Pederson said about not having three injured starters. “We still game plan the same. You always miss players. But this is football. You have to coach up the guys you have.”

The Eagles are missing speedy wideout DeSean Jackson, out for the season after abdominal surgery. Alshon Jeffery and leading rusher Jordan Howard returned from the bye unable to play because of injuries sustained two weeks ago.

But the Eagles jumped to a 10-0 lead and then couldn’t do anything else. Wentz completed only half his passes, was sacked five times and lost a fumble.

“We were in too many second-and-longs and third-and longs and that’s hard for your quarterback because you know you’re going to have to throw the ball,” Pederson said.

The Eagles had used a power run attack in consecutive wins at Buffalo and home against Chicago. But Howard couldn’t go because of an ankle injury and the Patriots limited Miles Sanders and Boston Scott to 64 yards on 18 carries.

Forced to throw often, Wentz had a tough time finding open receivers and connecting when he had any. Zach Ertz was his only reliable target, catching nine passes for 94 yards.

“They are the No. 1 defense in the league for a reason,” Ertz said. “They are extremely well-coached and they don’t beat themselves but overall we have to play better.”

The Eagles converted 3 of 13 on third down and had to punt on six straight possessions at one point, and 10 of 12 drives lasted five plays or less.

“We’re a better football team than what we played,” Pederson said. “We have to coach better. We have to play better. We didn’t make enough plays. Defense kept us in the game, but offense failed to execute.”

Even Philadelphia’s only touchdown wasn’t conclusive. Wentz’s 5-yard TD pass to Dallas Goedert was initially ruled an interception because Jonathan Jones ripped the ball away. But the call was overturned after a review.

“I felt like we gave up three points,” Belichick said. “We got an interception. They overturned it.”

Despite Philadelphia’s struggles, Pederson is confident the offense can get going again. Jackson isn’t coming back, so the Eagles won’t have their only deep threat. But Jeffery and Howard could return next week against Seattle.

“When you have your guys out there, we’ve proven that we have been able to execute.”