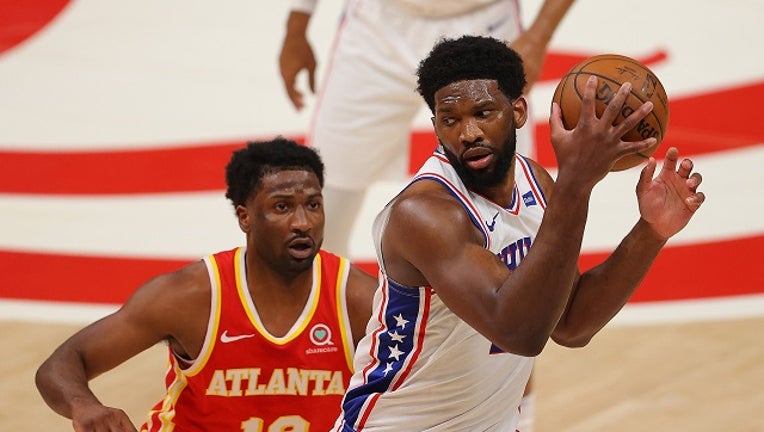 ATLANTA, GEORGIA - JUNE 11: Joel Embiid #21 of the Philadelphia 76ers catches a pass against Solomon Hill #18 of the Atlanta Hawks during the first half of game 3 of the Eastern Conference Semifinals at State Farm Arena on June 11, 2021 in Atlanta, G

ATLANTA - Joel Embiid scored 27 points and the Philadelphia 76ers rode a dominant third quarter to a 127-111 victory over the Atlanta Hawks on Friday night and a 2-1 lead in the Eastern Conference semifinal series.

Tobias Harris had 22 points and Ben Simmons added 18 to help the 76ers end Atlanta's streak of 13 home wins. The 76ers have taken the series lead with back-to-back wins.

The 76ers played up to their No. 1 seed, taking a lead of 22 points and keeping the advantage in double figures most of the second half. The Hawks played from behind after their last lead at 11-10.

Game 4 is Monday night in Atlanta.

Simmons had two baskets during the run, including a jam for a 76-60 lead.

Atlanta couldn't regain the momentum as the 76ers stretched the lead to 20 points, 93-73, late in the period.

Embiid, who faced constant double-teams from Atlanta's defense, made 12 of 16 free throws.

Embiid had a scare in the third quarter when he limped and appeared to be in pain after grabbing a rebound. Embiid appeared to step awkwardly on Clint Capela's foot and he remained in the game.

Hawks coach Nate McMillan asked for a strong start that eluded his team in its Game 2 loss. Instead, Philadelphia relied on an unlikely scoring source to grab the early lead.

Furkan Korkmaz, who scored a combined seven points in the first two games of the series, scored 11 points in the opening period while making two 3s. He added another 3 in the fourth for 14 points.

The 76ers stretched the advantage to 11 points in the second period before settling for a 61-56 halftime lead.

76ers: G Danny Green suffered a right calf strain less than four minutes into the game and did not return. Matisse Thybulle replaced Green. ... Harris hit the back of his head on a camera while falling on the baseline with 9:16 remaining in the fourth quarter. Harris walked off after being checked by trainers and returned to the game.

Hawks: Atlanta's last home loss was April 15 against Milwaukee. The 13-game home winning streak was the NBA's longest active streak. ... F Cam Reddish (right Achilles soreness) has participated in two-on-two and three-on-three drills but has not yet moved up to full five-on-five sessions. Reddish, who ultimately could help fill the void left by De'Andre Hunter's season-ending knee surgery scheduled for Tuesday, does not appear likely to return against the 76ers.

JUMPING TO HIS OWN DEFENSE

76ers coach Doc Rivers says he always "feels great" when he returns to Atlanta, where he began his playing career as the Hawks' point guard. He reminded reporters before the game he still holds the Hawks' career assists record.

Rivers felt compelled to mention his link to one of the game's all-time greats, Julius Erving — better known as Dr. J — when defending his talents to his skeptical players.