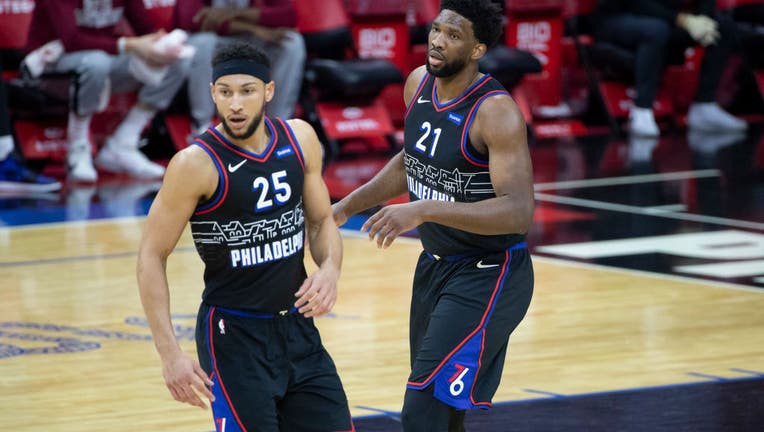 PHILADELPHIA, PA - FEBRUARY 27: Ben Simmons #25 and Joel Embiid #21 of the Philadelphia 76ers look on against the Cleveland Cavaliers at Wells Fargo Center on February 27, 2021 in Philadelphia, Pennsylvania. NOTE TO USER: User expressly acknowledges

A year later, one of them will walk away with the NBA’s highest individual prize.

Jokic, Embiid and Curry were revealed Thursday night as the three top votegetters for this year’s NBA MVP award, one that will be presented sometime during the playoffs. Curry is a two-time winner, Jokic’s best previous finish was fourth in 2019 and Embiid’s best MVP showing was seventh in 2019.

Jokic would be the first Denver player to win MVP. Embiid would be Philadelphia’s first winner since Allen Iverson in 2001 and Curry could become the ninth player in NBA history to win the trophy three times.

The 18 top-three vote-getters in six award categories — MVP, coach of the year, most improved player, rookie of the year, defensive player of the year and sixth man of the year — were announced Thursday.

The Utah Jazz, who finished with the NBA’s best record and home-court advantage throughout the playoffs, had a league-best four finalists. New York, back in the playoffs for the first time since 2013 as the No. 4 seed in the Eastern Conference, had three award finalists.

The Jazz and Knicks swept the top-three spots in the sixth man of the year category, with Jordan Clarkson and Joe Ingles both making the list from Utah and former NBA MVP Derrick Rose from New York getting a finalist nod there as well.

Denver, Philadelphia and Golden State had two finalists apiece, while Phoenix, Detroit, Charlotte, Minnesota and Sacramento had one each.