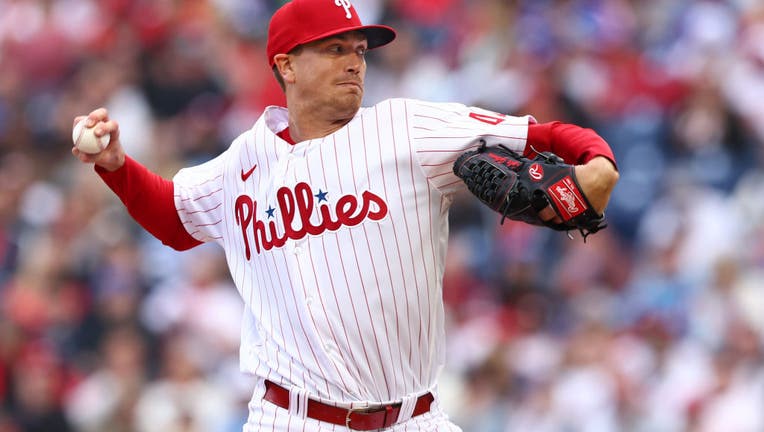 PHILADELPHIA - Kyle Gibson struck out 10 and tossed two-hit ball over seven shutout innings to lead the Philadelphia Phillies to a 4-2 win over the Oakland Athletics on Saturday.

Nick Castellanos hit his first home run for the Phillies, and Rhys Hoskins and Jean Segura hit back-to-back homers to support Gibson. Gibson (1-0) threw a tidy 82 pitches and walked none in his fourth-career double-digit strikeout game.

Jose Alvarado gave up Stephen Piscotty’s RBI single in the eighth to make it 4-1. Corey Knebel allowed Jed Lowrie's RBI single in the ninth and issued the first walk by a Phillies pitcher this season. Knebel still picked up his first save.

Who knows, maybe Bryce Harper was onto something in his pregame speech given on the field after he accepted his 2021 NL MVP award from Hall of Famer Mike Schmidt. Harper ran down the usual list of thanks for a season in which he finished with a .309 average and 35 homers: wife, fans, kids, Jesus, teammates. Harper laughed as he told fans, "You guys let us know when we suck, and when we’re really good."

Harper followed with a walk-off blast: "Let’s go have a party on Broad Street."

Phillies fans roared at the thought of the first championship parade for the franchise since 2008.

But first, they must make the playoffs. The Phillies haven’t made it to the postseason since 2011, and a 4-0 start last season ended with an 82-80 record. The Phillies opened with a three-game sweep of Atlanta — and the Braves won the 2021 World Series.

Still, it’s a promising start for the Phillies, and the $179 million they spent on Castellanos and Kyle Schwarber to put some punch in the lineup paid fast dividends. Schwarber led off opening day with a homer. Castellanos, who batted .309 with 34 homers, 100 RBIs and a .939 OPS last year for the Reds, hit a two-run shot to left-center off Cole Irvin (0-1) in the first inning. Harper was on base after he was hit by a pitch.

Gibson took control from there. The righty who pitches from the stretch struck out the side on 12 pitches in the third and struck out six through three innings. He allowed a one-out single in the first and retired the next 14.

Hoskins hit a solo shot to left in the sixth and Segura followed with his first of the year for a 4-0 lead.

ON THE ROAD AGAIN

The A’s have not been home since they broke for spring training in Arizona. They are in the midst of a 10-game road trip, the longest to start a season in franchise history. They play three in Philly, head to Florida for four against the Rays and wrap up the trip with three in Toronto. Oakland’s home opener is not until April 18.

With the A's not expected to play in front of big crowds, manager Mark Kotsay said the early season excitement on the road could help his team.

"The energy here yesterday was electric. The guys felt that," he said before the second straight game with 41,000-plus fans. "It’s not easy to go on a 10-day road trip out of the chute. We’re playing essentially three playoff teams at the same point."

Harper led the majors in 2021 with a .465 slugging percentage and 1.044 OPS, tied for the lead with 42 doubles and had 84 RBIs. The Phillies unfurled a "Congrats To Our MV3" banner out in right field and covered home plate with a "Bryce Harper MV3 2021″ tarp during the ceremony. Harper won his first MVP award with Washington in 2015.

The Phillies send RHP Zack Eflin to the mound to try to complete the three-game sweep against Oakland RHP Daulton Jefferies.