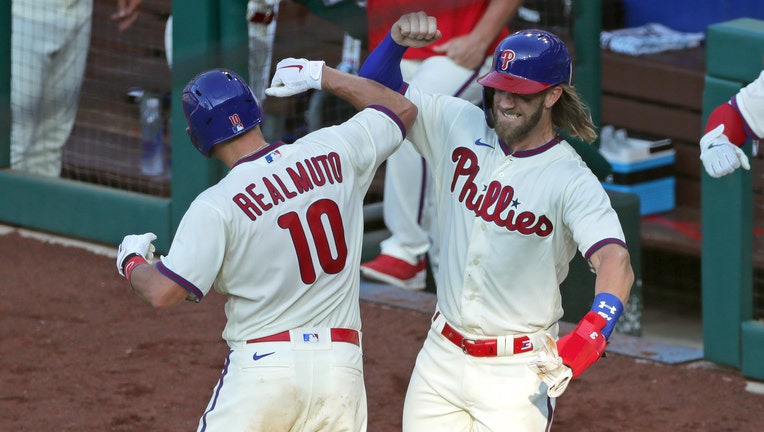 PHILADELPHIA - Zack Wheeler’s wait to make his Phillies debut unexpectedly took longer than the one for his newborn son. Five days after Wesley Wheeler was born, dad took home a small souvenir — a game ball from his first win for Philly.

Phil Gosselin homered twice, J.T. Realmuto added a three-run drive and Didi Gregorius went deep again to back Wheeler in the Philadelphia Phillies’ 7-1 victory over the Miami Marlins on Saturday.

“I couldn’t ask for much more,” Wheeler said.

Wheeler (1-0) tossed five-hit ball and struck out four over seven innings after signing a $118 million, five-year deal in free agency. The 30-year-old Wheeler, who spent his first seven seasons with the New York Mets, pitched only days after his wife gave birth to their son. His wife, Dominique, had a due date of Saturday — but Wesley Wheeler was born last Monday, making it quite the memorable week for the big new addition in Philadelphia’s rotation.

He had plenty of offensive help.

Gosselin connected off Alex Vesia (0-1) for a two-run shot in the sixth inning to give the Phillies a 3-1 lead and send manager Joe Girardi on his way to his first win with the team. Gosselin homered again in the eighth for his first career multi-homer game and a 7-1 lead.

“Jay Bruce asked me if I had another multi-homer game in the big leagues and I just laughed,” Gosselin said. “No. I probably had some in the minor leagues, maybe.”

Wheeler threw only 36 pitches over the first three innings and got Miami to hit into four inning-ending double plays through the first six. His only rough patch came in the fifth, when he allowed a walk and a single before Miguel Rojas tied the game 1-all on an RBI single.

The Marlins’ rally sparked Little League sounds out of the dugout. The calls of “Swing batter, batter!” were heard up near the cheap seats without fans in the ballpark to drown them out.

“This is not what you dream of being in the big leagues, in a game with nobody in the stands,” Marlins manager Don Mattingly said. “That’s what you’re doing in the Instructional League.”

Just a handful of Phillies fans pressed against a gate nearly 440 feet away near an outfield entrance and screamed, screamed, screamed for the home team. With Bryce Harper up and the bases loaded in the second inning, a lone “Let’s go, Phillies!” yell was heard. The call of encouragement hardly helped — Harper struck out swinging to end the inning.

Harper again jogged out to right field to open the game and bowed toward the empty sections where fans usually return the gesture and go wild for the popular Phillies slugger.

“I want to keep doing it,” Harper said. “I think it’s something that is really cool to be able to do that. I thought if I could find a camera, then it’s kind of like me doing it to the fans at home. I thought that was pretty cool. We’ll do that every day. I’ll find the camera every day and do that. It’s kind of like nothing’s changed and I’m still doing the same things I’m doing. I’m just trying to keep it as normal as possible.”

One fan who rooted for a ho-ho-homer? Yes, that was the Phillie Phanatic dressed as Santa Claus to add to the opening weekend festivities.

Gregorius hit his second homer in two days when he gave the Phillies a 1-0 lead on a shot to right in the second off Caleb Smith, who lasted just three innings.

Harper put a down a bunt single down the third base line to beat the shift in the seventh inning for his first hit of the season. Realmuto followed with a three-run shot off the brick wall in center to make it 6-1.

Fans in the outfield chanted “Sign J.T!” for the impending free-agent catcher.

“The fans are the game,” Harper said. “Being able to go out there and see them and the way they cheer you on, especially Phillies fans, they’re so into our games, they’re so into what we do as players and how hard we play and work and things like that, you’re definitely going to miss them during the game.”

Gosselin went 3 for 3 with two homers batting eighth as the designated hitter. He had seven career home runs in 647 at-bats over seven years coming into the season.

Vesia and Phillies reliever Tommy Hunter both pitched wearing No. 96.

Phillies pitching coach Bryan Price was not with the team. Girardi did not disclose the reason.

“I was an annoying kid in class who stood up and said I’m going to be a major league baseball player and other kids hated me for it.” — Marlins reliever Nick Neidert on his big league debut.